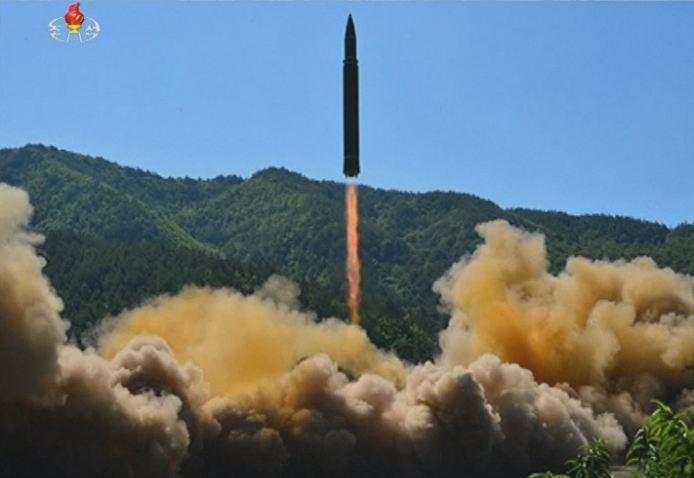 U.S. military officials described the mission Friday as a defensive show of force and unity from the three allied nations and said it demonstrated "the ironclad U.S. commitment to our allies."

"North Korea's actions are a threat to our allies, partners and homeland," Gen. Terrence O' Shaughnessy, U.S. Pacific Air Forces commander, said in a statement from Pacific Air Forces. "Let me be clear: If called upon we are trained, equipped and ready to unleash the full lethal capability of our allied air forces."

Tensions with North Korea continue to mount, even as President Trump meets with foreign leaders at the G-20 summit in Hamburg, Germany.

The U.S. Air Force B-1B Lancer bombers from Andersen Air Force Base on the island of Guam conducted a 10-hour sequenced bilateral mission with South Korean and Japanese fighter jets, the statement said.

"U.S. bombers and Republic of Korea fighters are just two of many lethal military options at our disposal," said Lt. Gen. Thomas Bergeson, U.S. Forces Korea deputy commander. "This mission clearly demonstrates the U.S.-ROK alliance remains prepared to use the full range of capabilities to defend and to preserve the security of the Korean Peninsula and region."

When the B-1Bs reached the Korean Peninsula, they were joined by South Korean F-15 fighter jets and U.S. Air Force F-16 fighter jets. The B-1Bs practiced what officials called "attack capabilities" by releasing inert weapons at the Pilsung Range.

As the bombers returned to Guam, they flew over the East China Sea with F-2 fighter jets of the Koku Jieitai, or Japan Air Self-Defense Force, the statement said.

"The U.S.-Japan alliance and the relationship between our militaries are stronger than they have ever been," said Lt. Gen. Jerry P. Martinez, U.S. Forces Japan commander. "We continue to train with our Japanese allies to ensure we are ready to defend ourselves from attack."

Mr. Trump and the leaders of South Korea and Japan, who met during the G-20 summit, issued a joint statement condemning the North's recent test-launch of an intercontinental ballistic missile and calling it a global threat that demanded "maximum pressure" in response.

Japanese Prime Minister Shinzo Abe, after meeting with Mr. Trump at the G-20 summit in Hamburg, Germany, said through a translator, "As I look at the current situation, particularly the security environment in the Asia Pacific region, including North Korea, we believe that it has become increasingly severe and against such backdrop together with you Donald we would like to demonstrate the robust partnership as well as the bond between Japan and the United States on this occasion."

A day earlier in Poland, Mr. Trump said the U.S. was considering "some pretty severe things" in response to North Korea's actions. While he offered no specifics, he has not ruled out military action.

North Korea's Ministry of Foreign Affairs said its intercontinental ballistic missile is meant to overcome U.S. hostility and enable the North to "strike the very heart of the U.S. at any given time."

On Friday, more than 120 countries at a U.N. meeting approved the first-ever treaty to ban nuclear weapons, but the U.S. and a handful of other countries abstained from the vote. In a joint statement, U.N. ambassadors from the U.S., Britain and France said they never intended to become party to the treaty because it "clearly disregards the realities of the international security environment."

Mr. Trump's national security team agrees North Korea is a grave threat. Defense Secretary James Mattis told CBS News' "Face the Nation" in May that a conflict in North Korea would be, "probably the worst kind of fighting in most people's lifetimes."

"North Korean regime has hundreds of artillery cannons and rocket launchers within range of one of the most densely populated cities on earth, which is the capital of South Korea," Mattis said.

Department of Homeland Security Secretary John Kelly told "Face the Nation" that once North Korea has the ability to reach the U.S. with a weaponized device, it's a serious threat to the U.S.

"The instant they get a missile that can reach the United States, and they have a weaponized atomic device, nuclear device on it, we're at grave risk as a nation," Kelly said.