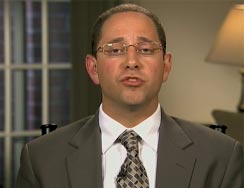 (CBS/WWJ/AP) DETROIT - The openly gay student assembly president at the University of Michigan has sued a former assistant state attorney general on charges of stalking and causing emotional distress.

Armstrong's attorney Deborah Gordon said in the complaint that Shirvell displayed a "bizarre personal obsession" with Armstrong through critical blog and Facebook posts in which he claimed Armstrong was pushing a "radical homosexual agenda."

"First of all, I've got him showing up in front of my client's house; I've got him going to places where my client is appearing as MSA president. He's obviously a troubled person," Gordon said, Wednesday. "What we wanted was for the record to be corrected by him. Since he's not willing to do it, we're gonna do it."

Shirvell told The Associated Press he had no comment.

According to CBS affiliate WWJ, Armstrong, who is set to graduate from the University of Michigan this spring, filed his lawsuit in Washtenaw County Circuit Court seeking more than $25,000 in damages.

Shirvell was fired by the state in December after being accused of harassing Armstrong.

Shirvell is a 2002 University of Michigan graduate.