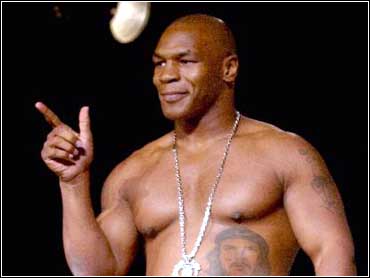 During a bizarre, profanity-laced tirade Thursday, Mike Tyson said he's on anti-depressant medication for a reason.

"I'm on the Zoloft to keep me from killing y'all," he told reporters during a news conference to promote his Oct. 20 fight against Andrew Golota in Auburn Hills, Mich.

The state boxing commission in Michigan has expressed concern about Tyson taking the drug and the fact that he stops taking it before fights.

"It has really messed me up, and I don't want to be taking it, but they are concerned about the fact that I am a violent person, almost an animal," Tyson said. "And they only want me to be an animal in the ring.

"That's why I set the pay-per-view records. There are nine million people who see me in the ring who hate my guts, most of them white. But that's OK. Just spell my name right."

Tyson showed up more than 2 1/2 hours late for the scheduled start of the news conference, having missed his flight out of Las Vegas. The start was rescheduled from noon to 2 p.m., but Tyson still didn't make an appearance until 2:40. By that time, Golota had answered a few questions and left.

Tyson seemed highly agitated, at one point stripping off his shirt and jumping onto the table on the dais, responding to a question about his condition.

He also apologized for his almost constant stream of profanity, saying: "This is how I talk. I'm a street person. I never wanted to be a street person; I don't even like them. But that's how my life has turned out.

"I've had a lot of tragedy, humiliation and degradation."

He said he only recently figured out why reporters don't like him.

"I don't know anything about being the heavyweight champion, or being a good, respectable person," he said. "I just want them to keep bringing guys on and I'm going to strip them of their health. I bring pain, a lot of pain."

Both Tyson and Golota have a history of ring transgressions, including Tyson's biting part of Evander Holyfield's ear off and Golota losing twice to Riddick Bowe for hitting low.

Golota still said he didn't expect the fight to be a dirty one.

Tyson, asked if he was concerned about Golota hitting him below the belt, smiled and said, "I hope he does hit me low. I really hope he does."