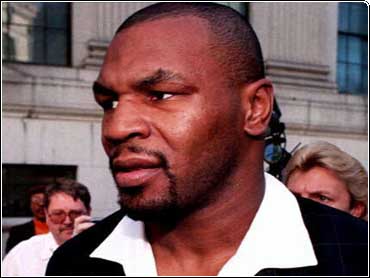 The fight originally was proposed for April 8 in Milan, but the date was moved back because Tyson reportedly wanted more time to prepare.

The 34-year-old Savarese (39-3) is on the downside of his career, but he figures to be a tougher opponent for Tyson than was Julian Francis of Britain. Tyson knocked out Francis in the second round Jan. 29 at Manchester, England.

Jay Larkin, in charge of boxing for Showtime, said Friday the fight will be part of a telecast that will be shown on a six-hour delay in the United States, beginning at 10 p.m. EDT.

Also on the telecast will be Zab Judah's first defense of the IBF junior welterweight title he won on a fourth-round knockout of Jan Bergman of South Africa on Feb. 12. Donald Tremblay, a spokesman for Main Events, Judah's promoter, said an opponent for Judah, of New York, will be announced next week.

Tyson, who will turn 34 on June 30, said after his victory over Francis that he would like about three more fights before he challenges champion Lennox Lewis of Britain.

Savarese, of Houston, was knocked down twice and lost a 10-round decision in his last fight June 9 to Michael Grant, who will challenge Lewis on April 29 in Madison Square Garden.

Although Savarese has lost three times in his last six fights, a solid showing by Tyson should move him into position for a pay-per-view fight in the United States. His win over Francis also was shown on a delay.

Savarese's first loss was in his 37th fight a 12-round decision to George Foreman in 1997. He next was knocked out in the fifth round by David Izon in the same year, then won three straight before losing to Grant.