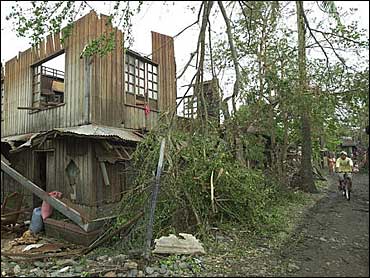 A powerful typhoon plowed into China's southern coast Thursday after killing at least 10 people in the Philippines, injuring 11 in Hong Kong and forcing the daring sea rescue of 16 sailors who lost control of their ship.

Typhoon Imbudo had winds of up to 100 mph, the official Xinhua News Agency said. The Hong Kong Observatory said it was one of the strongest typhoons to hit southern China's Guangdong province in recent years.

Eleven fishing boats sank in the coastal city of Yangjiang and a fisherman was missing, said a city official who declined to give his name. He said 3,500 people had been evacuated, but there were no immediate reports of deaths.

The typhoon uprooted trees, flipped over cars and blacked out power in the city of Zhanjiang, state television reported. It said Imbudo was headed inland, moving northwest at about 15 mph.

The death toll from Imbudo rose to 10 in the Philippines, where the storm hit earlier this week, officials said. The Office of Civil Defense said three others, including two children, were missing and feared drowned, while 20 people had been injured by landslides, falling trees and car accidents blamed on the storm.

Helicopter rescue teams from Hong Kong braved the typhoon in an 11-hour overnight operation to pluck a crew of mainland Chinese sailors from their rudderless container ship that was pitching wildly in 30-foot-high waves and winds of 72 mph.

"It was night and the weather condition was extremely poor," said Hung Shung-leung, a spokesman for the Hong Kong Maritime Search and Rescue Center. "The ship was being rocked badly. It made the rescue operation very difficult."

The helicopter crews repeatedly lowered rescuers onto the swaying deck of the Fu Feng — 270-foot-long ship — to lift the sailors to safety.

The entire crew was rescued, apparently with no injuries, Hung said.

Some residents of Guangdong's provincial capital, Guangzhou, were evacuated to shelters, said a city government official.

Authorities released water from four artificial lakes in the city in an attempt to prevent flooding, said the official, who declined to give her name.

In Hong Kong, at least 44 airline flights were canceled and 63 were delayed or diverted, while some ferry services were scrapped after meteorologists issued a typhoon warning Wednesday.

Hong Kong dropped its typhoon warning at midday Thursday, as the storm moved on. Financial markets opened half an hour late as workers cleared fallen trees.

At least 11 people were hurt in Hong Kong, a government spokeswoman said.