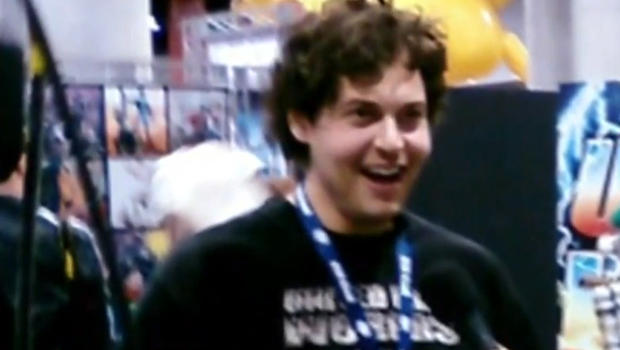 LOS ANGELES -- A Canadian real estate tycoon's son who wrote a graphic novel that features gruesome killings was convicted in Southern California Wednesday of the torture and mutilation of a live-in girlfriend who had given birth to their child weeks before. A Los Angeles jury found Blake Leibel, 37, guilty of first-degree murder, torture and aggravated mayhem in the slaying of Iana Kasian. A prosecutor said the crime "followed a script" from the graphic novel.

Leibel is facing life in prison without the possibility of parole, with sentencing set June 26, the station reports. The Los Angeles County District Attorney's Office had opted earlier not to seek the death penalty against Leibel.

The case made headlines in Canada, where his father, Lorne Leibel, a sailor on the country's 1976 Olympics team, built a fortune constructing homes in the Toronto area.

Blake Leibel moved to California and lived off an allowance of about $18,000 a month over a seven-year period until inheriting the majority of his mother's estate.

He worked in the entertainment industry, including as a director and creative consultant in 2008 on the animated series based on Mel Brooks 1987 film "Spaceballs," according to his profile on IMDb. He wrote and directed his own film comedy, "Bald," that same year.

He's credited as the creator and executive editor of the graphic novel "Syndrome," published in 2010. The book's plot follows a mad doctor's quest to test his theory that he can isolate the root of evil in the brain and fix it, trying his experiment on a serial killer.

The graphic novel opens outside a prison where the killer is about to be executed for 38 murders. It then flashes back to scenes of him hanging a couple by their ankles and slitting the man's throat.

The book "mimics what happened to the victim" three weeks after she gave birth to their daughter, prosecutor Tannaz Mokayef told jurors. Leibel used a knife in a "prolonged attack" in which the victim was "alive for the better part of the mutilation and mayhem," Mokayef  said.

Deputies went to the couple's apartment after Kasian's mother reported her missing. Leibel was arrested at the scene.