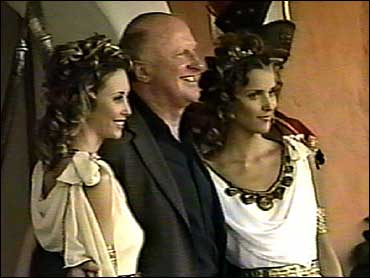 Jurors were shown an expurgated videotape Tuesday of women in gauzy gowns, half-naked male models and "Margaritaville" singer Jimmy Buffett at a $2 million party that former Tyco chief Dennis Kozlowski threw for his wife on a Mediterranean island.

Prosecutors maintained the party — more than half of which was paid for with company money — was a "stark example" of how Kozlowski and former chief financial officer Mark Swartz looted hundreds of millions from Tyco for their personal benefit.

The videotape — heavily edited at the request of the defense — showed Kozlowski welcoming about 75 revelers to the party on Sardinia.

"It's going to be a fun week," Kozlowski told guests arriving at the reception on June 11, 2001, for his new wife's 40th birthday. "Eating, drinking, whatever. All the things we're best known for."

Kozlowski and Swartz are on trial on charges of grand larceny and enterprise corruption, accused of stealing some $600 million. Each faces up to 30 years in prison if convicted.

Prosecutors say the two stole $170 million from Tyco by taking and hiding unauthorized pay and bonuses, raiding company loan programs and forgiving loans to themselves. They say the defendants made an extra $430 million on their Tyco stock by lying about the conglomerate's financial condition from 1995 into 2002.

Defense lawyers say that Kozlowski and Swartz earned all the compensation they got from Tyco and that all the appropriate people knew about their compensation and loans.

Defense lawyer Austin Campriello conceded that the party on Sardinia was a birthday celebration, but said Tyco business also was conducted.

The same year Kozlowski threw the birthday bash and sent Tyco half the bill, he told stockholders of a "relentless push to reduce costs," reports CBS' Mason.

Tyco, which has about 270,000 employees and $36 billion in annual revenue, makes a wide variety of things, including electronics and medical supplies, and owns the ADT home security business.

The jurors were shown 21 minutes of what had been a four-hour videotape. Justice Michael Obus said in ordering the expurgated version that much of what was shown on the tape — such as an anatomically correct ice sculpture of Michelangelo's "David" spurting vodka — was irrelevant to whether the defendants had committed any crimes.

The edited tape showed five young women in diaphanous frocks dancing with buff young male models. At another point, male models were shown striking muscle-swelling poses while female guests were photographed with them.

Music was provided by Buffett, flown in with his group at a cost of $250,000, and a rock band brought in at a cost of $20,000, Tyco party planner Barbara Jacques testified. She estimated the party cost $2 million and said Kozlowski guessed his share would be about $1 million.

Outside court, Kozlowski smiled and said: "Wasn't that tape boring?"