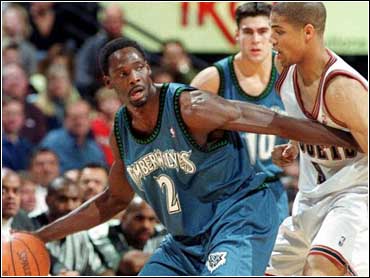 The Denver Nuggets' first mistake was letting the Minnesota Timberwolves creep back into the game. Then they let Kevin Garnett take over.

Garnett scored six of his 30 points in overtime, and the Timberwolves rallied from a 13-point deficit with three minutes left in regulation to beat the Nuggets 105-97 Saturday night.

"KG came off a screen, got a good look and knocked it down," Minnesota coach Flip Saunders said. "He made great plays down the stretch, and he did a good job of getting (Antonio) McDyess out of the game with fouls. That definitely helped us."

Garnett's three-point play on a jumper in the lane made it 86-86. After two free throws by Cory Alexander, Garnett tied it.

Garnett had six straight points for Minnesota in overtime, including an 18-foot jumper that made it 97-92 with 1:31 to go. Anthony Peeler hit 4-of-4 free throws in the final 17 seconds to ice it.

Garnett, who also had 14 rebounds, said he saw Nuggets players and fans "raising the roof in the third quarter. That's disrespect to us. I know they play well at home, but you have 12 minutes to go. They woke the sleeping giant."

Of his last shot in regulation, he said, "I don't put a shot up that I can't make."

Bobby Jackson had 20 points and Peeler 17 for Minnesota.

Denver rokie James Posey scored a career-high 23 points. McDyess and Raef LaFrentz had 20 points and 13 points, respectively, before both fouled out late in the fourth quarter.

Minnesota, which shot just 29 percent from the floor through three quarters, shot 56 percent in the fourth quarter and overtime combined compared to Denver's 29 percent.

Both teams were without their starting point guards. Denver's Nick Van Exel missed the game after aggravating a groin injury in Friday night's loss to Golden State. Minnesota's Terrell Brandon missed his fourth straight game with a sprained left ankle.

The Nuggets blew a 17-point lead heading into the fourth quarter, the largest lead they have surrendered after three quarters in franchise history. The previous record was 15 points in a loss to Dallas in 1981.

"We had the game under control until they turned up the pressure," Denver coach Dan Issel said. "When they did that, we started turning the ball over. We didn't have any ballhandlers. Golden State did the same thing last night."

It marked the second straight night that Denver squandered a late lead. They blew a six-point advantage by going scoreless in the last 2:56 in a 103-101 loss to Golden State on Friday night.

With Van Exel, McDyess and LaFrentz out of the game, the Nuggets had no scoring threat late in the game.

"We just stood on the perimeter and threw the ball around hoping to get an outside shot," Issel said. "It was almost as if we were afraid to shoot when the game starts getting tough."

Each team missed its first six shots and shot 33 percent in the first quarter that ended with Denver leading 26-23. After the early drought, the Nuggets mounted a 14-2 run, highlighted by two 3-pointers from Posey, to take a 16-8 lead.

Denver started the second quarter 0-for-7 and Minnesota 0-for-6 before Jackson's three-point play with 8:43 left. Jackson's subsequent free throw gave the Timberwolves a 27-26 lead, but Denver outscored the cold-shooting Wolves 20-6 the remainder of the period for a 46-33 lead at halftime.

Denver expanded its lead to 18 in the third quarter on Posey's fastbreak slam, making it 57-39 midway through the period. Posey's steal and layup at the end of the period gave Denver a 70-53 margin.

Peeler's 3-point basket and his layup after Jackson's steal got Minnesota started on its fourth-quarter rally.