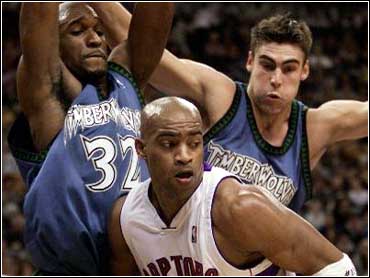 Before the game, the Timberwolves were reminded that they've never won in Toronto. Each game ticket read: "In the team's 4-year history the Raptors are undefeated at home against Kevin Garnett and the Minnesota Timberwolves."

Garnett narrowly missed the third triple-double of his career.

"We ticket thing motivated us. The guys were fired up," Garnett said. "I had to get my teammates involved and they responded."

The 6-foot-11 forward dominated from start to finish. Drawing double coverage, Garnett had five assists in the first 5:30 as the Timberwolves took an 18-15 lead.

He made five of his first six shots, finished with 18 points in the first half, and helped Malik Sealy score 14 and Joe Smith add 10 as Minnesota led 59-46 at the half.

The Timberwolves, who average a league-leading 26 assists, had 22 assists the first half.

"Whenever we have a high amount of assists we win the game," Garnett said.

The Timberwolves began the second half on a 12-4 run. Wally Szczerbiak made a layup, Garnett hit two free throws and two 12-foot jumpers, Radoslav Nestorovic made a hook shot, and Terrell Brandon made an 18-footer during the run.

Vince Carter led Toronto with 23 points, but he went to the line just four times. Tracy McGrady, now a starter, had 20 points and nine rebounds.

"Garnett's a good player. He plays hard, he likes to win and he showed it tonight," Carter said.

Sealy and Brandon each finished with 18 points.

"Everybody looked at the tickets and said we've got to bust out butts and change this," said Minnesota forward Joe Smith, who had 16 points.