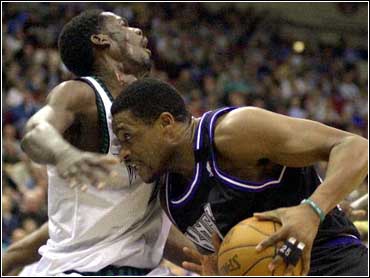 Bobby Jackson did more than just fill in for Minnesota on Monday night. He filled it up.

Jackson stacked the stat sheet with 17 points, 11 rebounds and 12 assists for his first career triple-double as the Timberwolves beat Sacramento 105-90 for their 18th win in 22 games.

Minnesota's backup point guard, starting for the third time in place of the injured Terrell Brandon, had season highs in rebounds and assists.

"When he (Brandon) goes out, I have to step in and do the things that he does," Jackson said of Brandon, who remains day-to-day after spraining his left ankle in Saturday's victory over Utah.

"I just wanted to be aggressive and stay aggressive, offensively and defensively," he added.

When Chris Webber was told about Jackson's triple-double, his eyes opened wide in disbelief and his response was "Yeah?"

After all this is the same Bobby Jackson, whose erratic play last season led Minnesota to draft point guard William Avery with the 14th overall pick. Coach Flip Saunders says that is a big reason for Jackson's improvement.

"I've never had anybody that worked harder than he did in the summertime," Saunders said after Jackson recorded the third triple-double for the Wolves this season and seventh in franchise history.

Kevin Garnett almost had the eighth with 31 points, 12 rebounds and seven assists for Minnesota (25-1), which has matched its best record ever after 42 games.

Webber had 14 points to lead seven players in double-figures for Sacramento, which has lost four of six since winning seven in a row. The Kings were making their fifth stop on an eight-game road trip, the longest trip by an NBA team this season.

"I don't think we played with a lot of energy," coach Rick Adelman said after his team scored fewer than 100 points for the first time in 13 games.

"I don't know what to think right now," Webber said. "I'm frustrated with the losses, and the way we're playing. Losing two in a row like this is tough."

Garnett scored 13 points in the third quarter as Minnesota took control against a worn down Sacramento team.

But, Garnett answered with a 7-0 run of his own, including a one-handed dunk over Divac. The Wolves took an 84-66 lead into the fourth and didn't look back.

The Kings' bench provided a spark in the second, as Scot Pollard scored eight points and Darrick Martin scored seven to bring Sacramento within 47-43 at the 5:39 mark. But, Minnesota ended the quarter on a 13-6 run to take a 60-49 halftime lead.