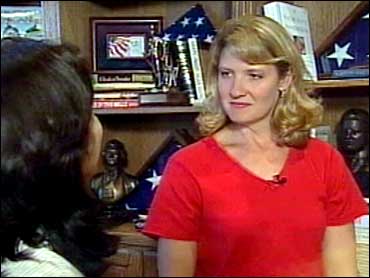 On Thursday, the tiny town of Shanksville, Pa., where United Airlines Flight 93 crashed in a field, will remember the Sept. 11 attack.

The 40 passengers and crew members aboard the flight have been called heroes because the plane never reached its intended target, believed to be the U.S. Capitol or the White House. Among those forever altered by that day is the family of Flight 93 passenger Tom Burnett.

"Daddy!" says Ana Clare as she looks at pictures of her father. "Daddy" has been gone for two years. Tom Burnett was one of the heroes on Flight 93.

"That was the last photo taken of us..." says the wife he left behind, Deena Burnett. "It's just incredible to think of the number of people who consider him to be a citizen soldier."

If he knew, she says her husband would be "overwhelmed, very surprised and very honored."

At the time, Ana Clare was only 3, twins Halley and Madison were 5 years old. Today, Deena Burnet says, "I can't say that we're 100 percent, but we're getting there."

She says from the start she has been very open with her daughters. "I've had to. I mean, this is their father, and he's gone, and there was no sugar-coating that," she says.

Ana Clare tells us, "The bad guy got into the seat and my daddy (motioning) was trying to throw the bad guys out of …"

Ana Clare continues, "The plane, but, he couldn't and it was too late and so my daddy died."

Madison adds, "And it was just sad."

The girls have a different view of reality now.

Deena Burnett says, "They know that bad things can happen to anyone. For a child who's 5 and 3, to realize, to understand, and to have experienced that, it takes away a great deal of their innocence, but it also makes them mature beyond their years."

For Deena, life is different and this year, she knows what to expect of the anniversary. What I did not expect on the first anniversary," she says, "was the flood of emotion, the constant looking at the clock -- 6:27, that's what time he first called."

Tom Burnett made four cell phone calls from Flight 93 to Deena Burnett at home, telling her he and some other passengers were going to "do something." Months later during the investigation, Deena Burnett got to hear his voice one last time, indicating to Deena Burnett that he had succeeded in reaching the cockpit.

At the crash site, Americans still pay tribute to those who helped bring down Flight 93, perhaps preventing the jet from becoming a missile like the planes that struck the World Trade Center and the Pentagon.

Deena Burnett says reading the letters people left on the fence at the site warms her heart. "It's a constant reminder that other people are praying for us and thinking about us and remembering Sept. 11," she says.

"A good citizen must work together or cooperate," writes Madison for her homework.

Deena Burnett notes, "Good citizenship was something that Tom talked about. He got out of his seat and he did something. And what he did affected the lives of thousands of people."

Madison explains, "My dad got up there and he took, um, the wheel and drove it into a little field."

Halley adds, "He was trying to save everybody on the airplane."

Ana Clare notes, "When my pre-school class in California found out that my daddy died, they were kind of sad; then they found out that he was a hero."

Asked what she wants her girls to know about her dad, Deena Burnett says, "I want them to know that he loved them. That he believed education was a gift, that freedom was a right, and they were both worth fighting for."

Deena Burnett has taken a paying job as an advocate, which, with her single parenting, leaves her litle time for herself.

She says, "That's been the oddest thing about grieving, is that there has been no anger. I really believe that something good has come from Sept. 11."

She says, "I think the good is that we had a resurgence of patriotism. I think that we have finally understood what leadership is all about, and what a hero really is."

Some of the Flight 93 families have returned to Shanksville. They'll attend a private ceremony near the crash site Thursday morning.