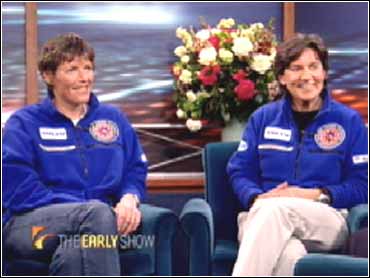 On February 11th, two schoolteachers made history as the first women ever to ski across Antarctica unaided, achieving a life-long dream.

Although they didn't know each other as children, coincidentally both women began dreaming of taking this journey when they were 12 years old. They're in their mid-forties - why did they decide to take the journey now?

"It took a long while to find the right ski partner," said Arneson. "Ann was sitting in Minneapolis reading the books about all the explorers and so was I in Oslo, Norway. We met two years ago and started the planning for this event."

It's a given that you have to trust someone completely before agreeing to ski across Antarctica with them. What makes a good partner?

"Humor" is the first quality that Bancroft mentioned. "We both approached the trip very similarly. We want to have fun. That's what sort of ignited us at the age of 12 -- that we thought this was fun, even though it's hard work. So she laughed at a couple of jokes. I thought she was okay. But, you know, just to be respectful of each other, in a very small tent, of each other's space and just -- you can't get any better than this woman here."

While it may seem that weather reaching 30 below zero, with a wind chill of 75 below, sounds miserable, Bancroft pointed out that it was summer in Antarctica.

"This is paradise really," said Arneson.

"We dressed in good clothes. We eat a lot of calories every day. And so you learn the tricks of the trade to stay warm," said Bancroft.

Arneson said the most challenging part was dealing with the weather. "We anticipated much more wind, that we'd be sailing longer distances. We got three long periods with absolutely quietness. It was that quiet we could hear the blood running in our veins," she quipped. "That was depressing for us, because we had a long distance to cover."

There were times when they thought they might not make it.

"This was 97 days. You have those moments," said Bancroft. "Fortunately, you know, you go a few more days and something changes to give you that hope again."

Luckily their bodies held up under the difficult conditions.

"We did a lot of training before we started. I think physically we did very well," said Arneson.

"You get injuries, a little bit of frostbite and muscle pulls and those kinds of things," said Bancroft. "You're anticipating some of that discomfort. It's hard on the body with no question. But…people at the end were saying, 'you look so good.' We try and take care of ourselves along the way."

They report that achieving their goal felt "pretty great."

Once they completed their mission, they had originally planned to ski and parasail the remaining 470 miles across a frozen ea known as the Ross Ice Shelf to McMurdo, Antarctica, to catch a ship that awaited them.

But after waiting for several windless days, they decided to call for a rescue airplane. They had just a few days before the onset of Antarctic winter would freeze the ocean solid and daylight would be reduced to nothing.

Nevertheless, they still set the record for what they did.

They also reportedly had 23 million hits on their website and got 20,000 messages during this time. (They had e-mail access while they were on their trip.)

Bancroft explained why they think people were so interested in what they were doing.

"I think everyone has dreams and goals…So I think there was a lot of identifying with really just sort of having the courage to step out in our mid-40s and make our childhood dream come true," explained Bancroft. "I think most people don't want to go to Antarctica…but I think they do identify with the challenges they have in life and trying to overcome them."