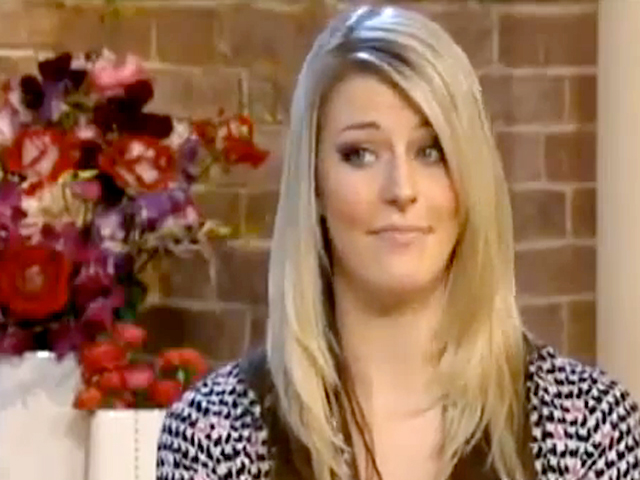 (CBS) Hazel Jones made headlines worldwide and raised a few eyebrows last week when she went on a British talk show to discuss her unique medical condition. Jones was born with uterus didelphys, a condition that causes her to have two separate uteruses, cervixes, and vaginas.

Jones didn't even realize the condition was unique until she was 18 and her serious boyfriend told her that something was different. Her mother and doctors hadn't noticed at birth, though once Jones began to have her period, she was faced with a new set of challenges.

She even asked one of her friends which hole to put the tampon in, causing her friend to make fun of her, thinking she was inserting it rectally, Jones said on ITV's This Morning.,

"I kept my mouth shut after that for quite a while," Jones said. But every time she had her period, she'd suffer terrible cramps.

"I used to suffer from horrendous cramps and my periods could be very heavy," she said on This Morning. "I now know that my periods were worse because I have two wombs."

Dr. Jill Rabin, professor of obstetrics at gynecology at Hofstra North Shore LIJ School of Medicine in New York, told HealthPop that cramps are a telltale sign of uterus didelphys, and often when girls first discover the condition.

What is uterus didelphys? Rabin said the condition is a "failure of fusion" for women. When developing in the womb, a girl's reproductive system starts with two tubes. These tubes fuse and a septum breaks down to form one uterus, one cervix, and one vagina. Hazel's septum never broke down, which gave her two of each.

Rabin says uterus didelphys isn't as rare as one would think, and estimates suggest one in 3,000 women have the condition. Rabin said that number could be even higher since many women with the condition have one vagina, and may never experience severe cramps, leaving the condition unnoticed until child birth. Women with uterus didelphys are more likely to have a breached childbirth, so a doctor may discover an extra uterus or cervix when performing a C-section.

"It's not that crazy at all, even though it sounds like a sci-fi thing," added  Dr. Vincenzo Berghella, director of maternal fetal medicine at Thomas Jefferson University in Philadelphia, to ABC News. "We see many couples, maybe one a month or more." ITV reports that by having two vaginas because her septum never disintegrated, Jones's condition may be closer to one in a million in occurrence.

The condition could also cause complications, including miscarriage, according to Rabin. Some women who have two cervixes may develop cramps when the uterus fills up with blood - like a balloon - requiring a medical procedure to drain the blood. Some women with the condition may have an additional uterus that never fully developed and is like a "vestigial" horn, so it's not able to release blood at all during menstruation, causing severe pain and requiring surgery to remove it, Rabin said.

If you have the condition or are experiencing severe menstrual cramps, see a doctor. Rabin says there are a lot of doctors who are used to seeing women with these differences, and can help care for them.

Says Rabin, "If you are someone with this, you're far from alone."

Here's the interview with Hazel Jones: