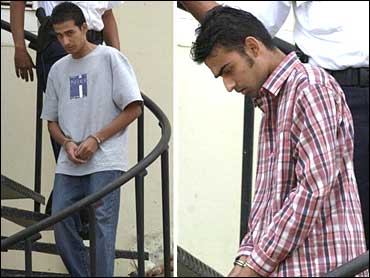 A judge in Aruba has ordered the immediate release of two Surinamese brothers held for nearly a month in the disappearance of an Alabama teenager. A third detainee, the 17-year-old son of a top justice official in Aruba, was ordered held for 60 more days, court officials announced.

Earlier today, attorneys for the three argued that they should all be released, because there wasn't enough evidence to continue holding them.

Joran van der Sloot, the 17-year-old son of a justice official in Aruba, and his friends, Surinamese brothers Deepak Kalpoe, 21, and Satish Kalpoe, 18 arrived at the Dutch Caribbean island's only courthouse in unmarked cars and were escorted through a side door.

The Kalpoes were seen being escorted out separately at different times more than an hour later.

Family members of 18-year-old Natalee Holloway arrived at the courthouse about the same time as the three young men and stayed for about an hour. Holloway's stepfather George "Jug" Twitty, said the family felt it was important to make an appearance.

"It was comforting for my wife to be in there today," he said of Holloway's mother, Beth Holloway Twitty. Holloway Twitty did not speak to reporters.

Lawyers for the Kalpoe brothers told reporters prosecutors had requested permission to hold the brothers for another 60 days.

"They did not present any new evidence against my client," said one of Satish's lawyers, Elgin Zeppenfeldt, before the judge ordered the release. "I believe they'll have to let him go because it's getting harder and harder to hold him."

"The further we get, the more it shows my client had nothing to do with any crime," he said. "What was presented (in court Monday), in my view, was beneficial to my client."

Before the judge's order was announced, the Kalpoes' mother, Nadira Ramirez, expressed hope for her sons' release as she waited outside the courthouse along with a handful of curious tourists and hordes of news media.

"We are hoping and expecting them to be released because they are innocent," she said. "They don't have any evidence against them."

A lone protester walked back and forth in front of the courthouse with a sign reading "Let them go. They are innocent. This is a setup." She identified herself as Myriam Croes, but would not comment further.

The three young men had been in custody since June 9. All have acknowledged that they were with Holloway in the early morning hours of May 30, the day she disappeared. Van der Sloot's mother, Anita van der Sloot, said her son told her he was alone with Holloway on a beach but that he did not harm her. The Kalpoe brothers have told police they dropped Holloway and van der Sloot off near the Marriott Hotel about 2 a.m. and that that was the last time they saw the blond-haired, blue-eyed high school graduate from Alabama.

Authorities said they have no physical evidence suggesting Holloway is dead, but Attorney General Karin Janssen has said that it would not be impossible to argue a criminal case even without a body.

Under Dutch law that governs Aruba, a protectorate of the Netherlands, detainees can be held 116 days before being charged by a judge.

Holloway vanished the same day she was to catch a flight home after a five-day vacation celebrating her high school graduation with 124 other students from Alabama. Numerous searches by Dutch marines, Aruban investigators and volunteer rescue groups have failed to turn up any trace of her.

Holloway Twitty arrived in Aruba within hours of her daughter's disappearance and has been on the island ever since, distributing fliers, monitoring searches and appearing on national U.S. television shows to keep up the pressure on investigators.