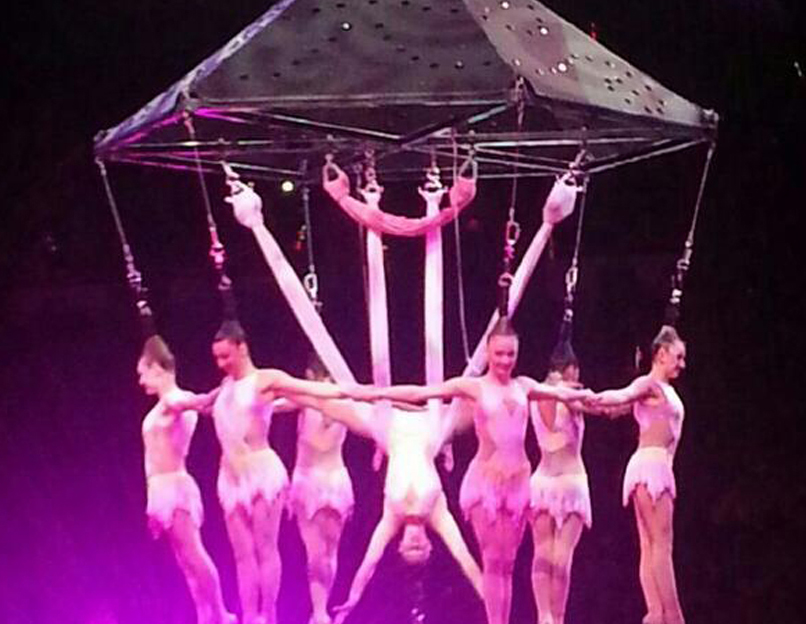 PROVIDENCE, Rhode Island - Two of the eight circus acrobats who plunged to the ground during a hair-hanging act have spinal cord injuries, and only time will tell if they can ever walk again, their medical team said on Wednesday.

Neurosurgeon Adetokunbo Oyelese said the two most seriously injured can feel their legs but move them only minimally. While he is hopeful they will walk again, it could take one to two years before they do.

"This is going to require patience," he said.

Meanwhile another of the acrobats told The Associated Press that she wants to get back in the ring, and that she is hopeful her fellow acrobats will someday return, too.


"I'm hoping to join back up with the tour and show the world that I'm OK, and I'm hoping some of the other girls will do the same," Samantha Pitard told The Associated Press after being released from a hospital Tuesday.

Pitard and the seven other acrobats were performing an act described as a "human chandelier," hanging from an apparatus by their hair during a Sunday performance of the Ringling Bros. and Barnum & Bailey circus, when a clip at the top of the apparatus snapped, dropping them about 20 feet to the ground.

The other women remained at Rhode Island Hospital, where a dancer on the ground who was injured was treated and released Sunday. Several acrobats were still in intensive care, with injuries that included a laceration to the liver, broken bones and joints, and spinal fractures.


Doctors said some of the women could be released within a few days. All will need physical therapy, which will take months, before they can perform.

Orthopedic surgeon Roman Hayda said he didn't know whether the women could be acrobats again, but that the "goal is to get them there." He said the fact that the women were young and physically fit before the injuries would help their recovery.

Pitard, 23, said she's the only one of the troupe who can walk on her own. But she said the others are in good spirits amid an outpouring of support, including get-well cards from children who witnessed the accident. About 3,900 people were in the audience.

"Every single one of us in the troupe, every single circus performer, knows that they are risking their lives every time they go out there to perform or practice," she said. "We hope it doesn't happen, but we know that we are taking that risk, and we love it enough to take that risk every day to make people happy."

Pitard said it had been a normal performance Sunday. The curtain dropped to reveal the eight women suspended in the air, but something went wrong when they did their third leg position.

"We heard just a big crack, huge noise, and then we were just plummeting to the ground," she said. "It was very fast."

The 350-pound chandelier landed on them. Pitard said crews got to them quickly to free them from the apparatus, then gave them medical attention.

Pitard suffered fractures on her spine, a cut on her head that required three stitches and a bitten tongue.

Local investigators are turning over the broken clip and other material to federal workplace safety authorities.