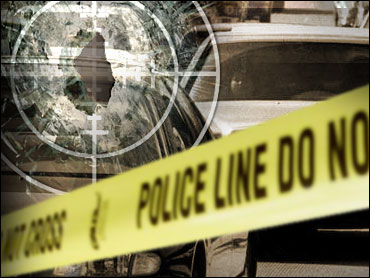 A van and a Mercedes were shot minutes apart on an interstate Sunday in a region where a series of 21 sniper shootings have occurred, investigators said.

The gunfire seems consistent with the sniper shootings along Interstate 270 south of Columbus, based on initial evidence, Franklin County Sheriff's Chief Deputy Steve Martin. He stopped short of linking the two shootings to the serial gunfire.

No injuries were reported in Sunday's shootings, which happened about 11:30 a.m. on Interstate 71 near Jeffersonville, about 40 miles southwest of Columbus, said Jerri Redfern, a dispatcher with the State Highway Patrol.

One person has died in the serial shootings, which have targeted vehicles, schools and homes since May.

Authorities were looking for a dark sports car that may have been connected to the gunfire.

Martin said the shots were fired from two overpasses about one mile apart. Witnesses said they saw a white man in his 30s or 40s and a small, dark-colored vehicle on the overpasses. Authorities have said some shots in the previous cases came from overpasses.

Authorities had taken two juveniles with a pellet gun into custody after Sunday's shootings, but ultimately determined they were not connected to the crimes, State Highway Patrol Lt. Rick Fambro said. The youths were in a car matching the witnesses' description, he added.

"Basically it's a case of being in the wrong place at the wrong time," he said. Authorities questioned the juveniles and were releasing them, Fambro said.

One lane of I-71 was closed, backing up traffic for several miles, as police searched the area of Sunday's shootings. Officers were seen examining a van parked at a gas station off I-71 and a car parked on the highway shoulder about two miles away.

Cars, school buses and homes have been fired at on or near a stretch of I-270. A passenger in a car was killed in November.

On Tuesday, a bullet struck the windshield of a van on I-71, which intersects I-270, authorities reported Friday.

Ballistics tests on the bullet fired Tuesday determined that it is one of at least eight to come from the same gun used in the deadly attack, authorities said.

The shootings started in May, although most have occurred since October.