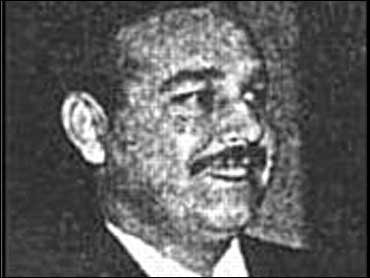 Saddam Hussein's son-in-law has left the Syrian capital and surrendered to the Iraqi National Congress in Baghdad, a spokesman in London said Sunday.

Jamal Mustafa Abdallah Sultan al-Tikriti is married to Saddam's youngest daughter, Hala, and was deputy head of the Tribal Affairs Office in Saddam's ousted regime. He ranks No. 40 out of the 55 top Iraqi officials wanted by the U.S. military.

"There have been some negotiations until he was persuaded to come to Baghdad and surrender to our people in Baghdad," said Haider Ahmed, a spokesman for the INC in London.

He said he did not know precisely when Jamal Mustafa surrendered, but believed it was Sunday. Jamal Mustafa had been persuaded to leave Damascus and surrender in Baghdad, Ahmed said.

He said his information came "from my colleagues in Baghdad."

Jamal Mustafa was being questioned by intelligence officers of the Free Iraqi Forces on Sunday and would be turned over to the U.S. military "in a matter of hours, not days," Ahmed said.

Entifadh Qanbar, the INC liaison to U.S. Central Command in Doha, Qatar said it was "Our general policy is to turn over war criminals to the Americans."

He said Jamal Mustafa is in his mid-30s and had no information about the whereabouts of the daughter.

Officials at Central Command said they had heard the reports but could not confirm the surrender. Syrian officials were not immediately available for comment on Jamal Mustafa's reported surrender.

The report comes as President Bush applauded signs Sunday that Syria is beginning to heed American demands for cooperation against Saddam's defunct regime.

Tensions between the United States and Syria escalated after reports surfaced that members of Saddam's deposed government had crossed the border to flee the U.S.-led war.

Syrian President Bashar Assad told two U.S. congressmen Sunday that the country will not give asylum to war crimes suspects from Iraq and will expel any Iraqi who should cross the border. Reps. Nick Rahall and Darrell Issa, visiting Damascus, described the Syrian president as eager to deal with U.S. concerns.

Ahmed said Jamal Mustafa was accompanied from Syria by one of Saddam's top body guard's who was also arrested Sunday by the INC.

Khalid Hmood was the head of Iraqi intelligence during the war and ranked a major in Saddam's personal security detail, according to Ahmed.

Ahmed was unsure when the men left for Syria but said it was "certainly not before the war.

"I wouldn't be surprised if they have some information about Saddam's whereabouts or other officials," Ahmed said.

The head of the INC, pro-U.S. opposition leader Ahmad Chalabi, earlier told Fox News from the Iraqi capital that Jamal Mustafa had been apprehended.

Jamal Mustafa and al-Ghafar are among the eight people on the list of 55 most wanted Iraqis to be accounted for thus far. One other has surrendered, Lt. Gen. Amer al-Saadi, Saddam's science adviser.

Ali Al Hasan "Chemical Ali" Majid is believed to have been killed.