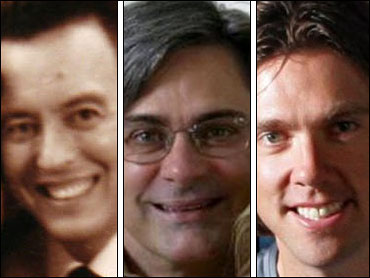 Two climbers still missing on Mount Hood may have been swept to their deaths over a treacherous cliff by howling winds of more than 100 mph after they left their possibly injured companion behind in a snow cave to get help.

Sheriff Joe Wampler offered that scenario as rescuers went back up the mountain in helicopters Monday to retrieve the body of Kelly James from the snow cave and try again to find his two companions, who have been missing for a week.

But the sheriff spoke grimly about the chances the pair were still alive: "We failed them. We literally failed them. But we tried our best, I know that."

Wampler said climbing equipment found on the mountain — including two slings and two aluminum anchors driven into the snow — led rescuers to believe that James' companions, Brian Hall and Jerry "Nikko" Cooke, had tried to secure themselves to the steep slope. That was the last sign of the two.

Because of that, authorities were "narrowing the likelihood that there may have been an accident," the sheriff said.

The spot on the 11,239-foot mountain where the two men vanished is commonly known as "the gullies," with a 60-degree slope and a treacherous 2,500-foot drop-off. There have been 13 deaths recorded in the same area during the past 40 years.

James, a 48-year-old landscape architect from Dallas, made a cell phone call from the cave on Dec. 10, telling his family the party was in trouble.

Wampler said it appears the three climbers succeeded in reaching the summit from the difficult north side and started go down the easier south side. They apparently tried to pass through a rock-and-ice formation known as the Pearly Gates but did not find it.

They built a snow cave, possibly because of bad weather, the sheriff said. He said all three probably spent the night of Dec. 8 there. The next day, he said, two of the men probably left the cave to go in search of help for James, who may have been injured. Then the weather deteriorated even more.

The two had to dig another snow cave on a steep slope for themselves, not far from the first one, and apparently used snow anchors to secure themselves to the mountain as bad weather raged around them, the sheriff said.

"At some point they were standing there clipped into something, probably because it was so windy there. I mean this is a really steep, dangerous place on the mountain," Wampler said.

Two ice axes, a glove, some rope and a piece of sleeping mat were found along with the slings and snow anchors.

Now the search is focused on two adjacent glaciers — the Eliot and Newton — below the caves where the men last sought shelter and where they may have fallen, CBS News correspondent Jerry Bowen reports.

The climbers may have suffered through weather similar to conditions on Mount Everest, the world's highest peak, said Jim Whittaker, who in 1963 became the first American climber to reach the top of Everest.

"It can turn into an Everest when you get those high winds and snow," said Whittaker, speaking from his home in Port Townsend, Wash. "You get knocked over by the wind. Your goggles fog up. You can't even travel."

Most climbers attempt Mount Hood in May and June, when the weather is calmer. But Whittaker said he did not think it was reckless for the three men to climb Mount Hood during the winter.

"They were climbers that knew what they were doing. They were just pushing themselves to their farthest frontiers. That's when people are at their best," he said.

Frank James, brother of Kelly James, choked back tears when he said a ring found on his brother's body inside the snow cave had confirmed his identity.

"This is a difficult day for all three families," James said. "I feel that I have two other brothers still on the mountain," he said.