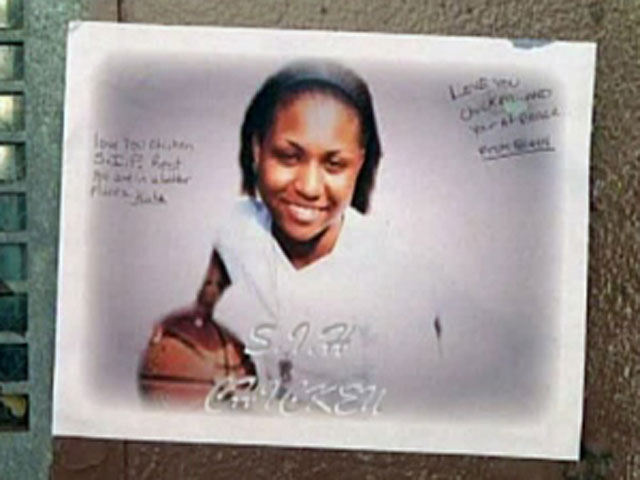 Witnesses said 18-year-old Murphy was trying to outrun the shooter in a hallway on the fourth floor of the Grant Houses in Upper Manhattan when she was killed. Police said the shooting may have been a case of mistaken identity, reports CBS station WCBS.

Police said they found Murphy with a gunshot wound to the head around 4:14 a.m. Sunday. She was pronounced dead at the scene, reports the station.

On Tuesday, Police Commissioner Ray Kelly said investigators were looking for Robert Cartagena, 20, and Tyshawn Brockington, 21, in connection with the shooting. Surveillance footage caught the two men with guns in their waistbands, Kelly said.

On Monday, Terique Collins, 24, was arrested and is being held on charges of criminal possession of a weapon, according to Police Spokesman Paul J. Browne. Police said they believe Collins gave the gun to one of the two suspects.

Murphy was a senior at Murry Bergtraum High School for Business Careers and was considered one of the top girls basketball players in the city.

Her coach Ed Grezinsky said she already had offers from colleges around the country that were interested in her. Her dream was to go to college, get into the WNBA and get her mother out of the projects.