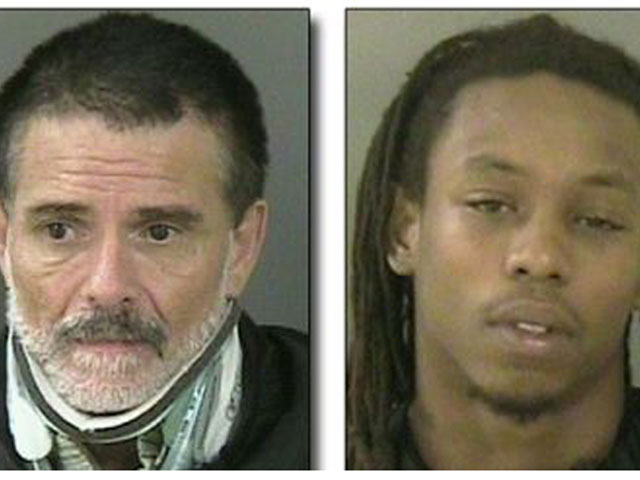 (CBS/AP/WPEC) VERO BEACH, Fl. - Two maximum security prisoners being held for first degree murder escaped from the Indian River County Jail on Monday. The two men who were cellmates, 25-year-old Leviticus Taylor and 51-year-old Rondell Reed, were last seen by fellow inmates at around 4:30 am Monday. It is believed that the men were picked up by two women in a jeep just outside the jail, says CBS affiliate WPEC.

Law enforcement agents are scanning the woods near the Vero Beach airport early Monday. Officials are now looking at the surveillance tapes and jail phone records for any information.

Police do not know if the men are armed, but they have said they should be considered dangerous, Sheriff Deryl Loar said at a 10 a.m. news conference.

It appeared the prisoners got through a wall which led to an outside area, where they discarded their red prison uniforms. They somehow broke through a locked door and climbed over a 12 foot-high-fence topped by razor wire. A string found at the scene may have been used to pull down the razor wire.

It is thought Taylor and Reed escaped using the same methods that three prisoners used to escape the jail 6 years ago, reports the Sun Sentinel. In December 2005, three men got out of the prison complex by ripping out a shower fixture and crawling through a space in the wall. They ran through a recreation area outside and managed to scale the fence.

The escapees were eventually caught and the crawl space was then reinforced with bars, says Sheriff's Office spokesman Deputy Jeff Luther. Unfortunately, Taylor and Reed must have acquired tools to take out the bars and then took advantage of the same crawl space to break free, Luther imagines.

Taylor was convicted of first-degree murder in September and scheduled to be sentenced on November 10th. Reed was accused of second-degree murder in April and was due in court this December. Investigators describe Reed as a criminal who will do whatever it takes to escape the law. He even broke out of prison in North Carolina 20 years ago.

Authorities warn anyone who is looking out for the prisoners that their appearances have changed since their booking photos. Taylor no longer has dreadlocks, and Reed's hair has grayed. There is a $1,000 reward for information to help in their arrest.