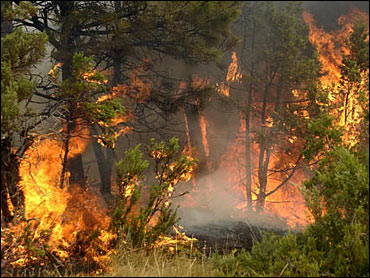 Two firefighters died after they were overrun by flames while battling a 1,000-acre wildfire near the Montana state line, officials said Wednesday.

No further details on Tuesday's deaths were released. All firefighters were pulled from the blaze deep in the Salmon-Challis National Forest pending an investigation. Forest service officials said the wildfire was caused by lightning.

In north-central Montana, neighbors armed with water tanks on their truck beds pitched in to help protect each others' homes as a cluster of range fires swept across more than 117,000 acres.

Farmers and ranchers in Montana have played a big role in fighting flames there and have gotten little sleep since wildfires were sparked last week. Residents have built fire lines, watered down yards and helped neighbors pack up valuable belongings.

Incident commander Jim Gray said Wednesday could be another difficult day, with temperatures forecast to rise above 105 degrees and the area predicted to be buffeted by southwest winds.

"It doesn't appear we're going to get much help out of the weather, just problems," he said Tuesday evening. The fire has so far charred some 117,570 acres, or 184 square miles.

Hundreds of firefighters were busy protecting buildings Wednesday, including the farm complex where the anti-government Montana Freemen holed up in a 1996 confrontation with federal agents.

A single outbuilding burned, but 75 buildings were at risk, officials said Tuesday.

Tempers also were rising. Some residents blamed the Bureau of Land Management for one fire, and criticized the interagency management team that was directing more than 400 firefighters in the effort to corral the fires.

The fire started on bureau land and could have been stopped at 20 acres, but bureau authorities would not allow residents to help suppress it, said Ross Childers, who had two ranches in danger.

He estimated he had lost 8,000 acres of pasture for his cattle. He did not know if any cattle had died. Childers' ranches, like many in the area, include some land leased from the bureau.

Trudie Olson, public affairs director for the bureau in Billings, said she was not familiar with Childers' complaints. She said that the bureau has aggressively attacked all new fires when spotted.

Wildfires this year have charred some 1.46 million acres nationwide. That remains a quieter-than-average wildfire season, however; on average, 2.05 million acres have been blackened by this date. And fire managers in most states reported progress on digging containment lines and protecting rural homesteads.

In Wyoming, firefighters worked Tuesday to protect six homes about a mile from a 1,400-acre blaze in Johnson County and three ranches about a half-mile from the flames. Another blaze near the Montana state line had charred more than 6,000 acres.

In Colorado, about 20 people were evacuated from seven homes Tuesday night when a wildfire spread quickly to the edge of the community of Glenwood Springs, about 130 miles west of Denver. It was heading away from the houses by late Tuesday, Fire Chief Mike Piper said.