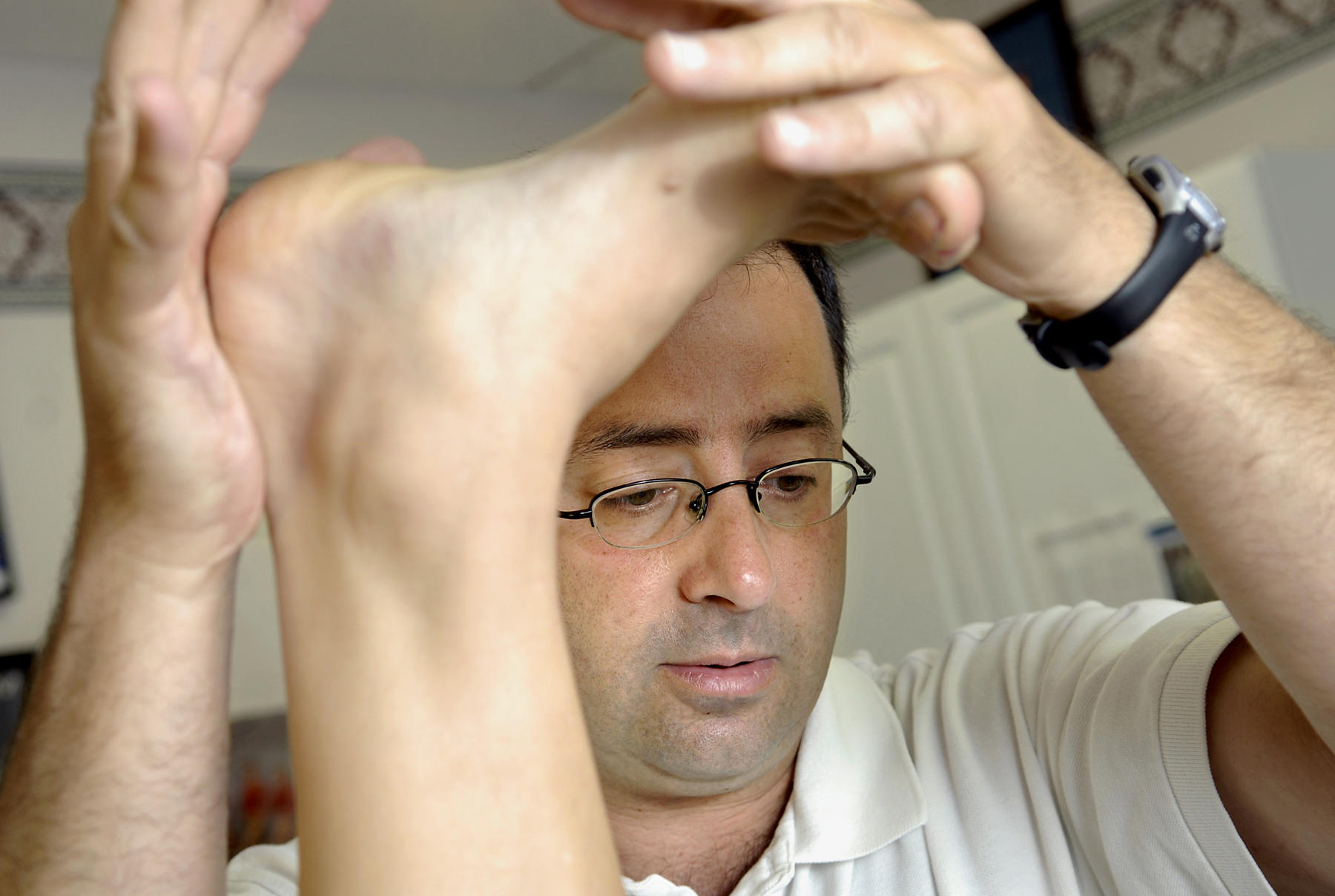 LOS ANGELES -- Two gymnasts, including a member of the 2000 U.S. women’s Olympic team, say they were sexually abused by a former longtime doctor for USA Gymnastics, court documents and interviews show.

Dr. Larry Nassar, 53, who worked for decades for the gymnastics organization until his dismissal last year, sexually groped and fondled the teenage Olympian under the guise of physical therapy during her elite career, according to a lawsuit filed last week in California.

The Olympian is identified as “Jane Doe” in the lawsuit against Nassar and the USA Gymnastics organization. Her attorneys on Monday identified her only as a medal-winning member of the team that competed in the 2000 Sydney Olympics.

The second gymnast, Rachael Denhollander of Louisville, Kentucky, told the Indianapolis Star newspaper Nassar sexually abused her in 2000 while she underwent treatment for lower back pain at Michigan State University, where Nassar is a faculty member.

The newspaper says, “The women, in separate interviews with IndyStar, provided detailed accounts that closely mirrored each other as they outlined their allegations” against Nassar.

Denhollander, who was 15 at the time, told the Star that Nassar became gradually more abusive over the course of five treatments, including massaging her breasts and penetrating her. She said she filed a complaint last month with university police.

Denhollander said her mother was at the therapy sessions, but that Nassar positioned himself in such a way that she couldn’t see what was happening.

“I was terrified,” Denhollander said. “I was ashamed. I was very embarrassed. And I was very confused, trying to reconcile what was happening with the person he was supposed to be. He’s this famous doctor. He’s trusted by my friends. He’s trusted by these other gymnasts. How could he reach this position in the medical profession, how could he reach this kind of prominence and stature if this is who he is?”

Nassar’s attorney, Matthew Borgula, said in an email to The Associated Press that Nassar plans to “vigorously defend himself.”

“Dr. Nassar denies any misconduct relating to any gymnast, patient or anyone else,” Borgula wrote. “To the extent he provided medical treatment to anyone, that treatment was always done with consent of the patient. He is proud of his 29 years of volunteer service with USA Gymnastics.”

The California lawsuit says that USA Gymnastics negligently suppressed, concealed or failed to disclose knowledge that Nassar had engaged in sexual conduct with team members.

“Our client represents the very best America has to offer,” John Manly and Vince Finaldi, the attorneys who filed the lawsuit, said in a statement. “She sacrificed her youth and adolescence, spending thousands of hours in rigorous and often painful training to bring glory to our nation as an Olympic athlete. She had an absolute right to trust USA Gymnastics, its coaches and staff. Unfortunately, they have proven time and again that they are more interested in protecting the reputation of their multi-million-dollar enterprise than the child athletes who are entrusted to their care.”

The lawsuit does not provide specific instances where USA Gymnastics knowingly withheld information.

USA Gymnastics released a statement Monday night indicating that Nassar was relieved of his position in the summer of 2015 when the organization’s President Steve Penny went to authorities when learning of athlete concerns about Nassar.

“USA Gymnastics has cooperated fully with the law enforcement agency since we first notified them of the matter, including - at their request - refraining from making further statements or taking any other action that might interfere with the agency’s investigation,” the statement read. “We are grateful to the athletes for coming forward to share their concerns when they did.”

Nassar has also been temporarily relieved of clinical and patient duties with Michigan State, where he is an associate professor in the sports medicine program, pending the police investigation into the criminal complaint, according to school spokesman Kent Cassella.

University police did not immediately respond to phone and email messages left by The AP.