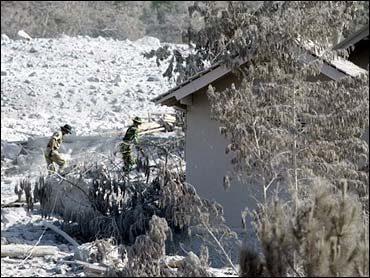 Two men were found dead Friday in the emergency bunker where they had sought shelter from Indonesia's erupting Mount Merapi, one immersed in a bathtub where he had tried to escape the heat.

The men were helping evacuate a village when a burst of volcanic activity forced them to seek shelter in the bunker.

But the bunker, one of several dotting Merapi's slopes, was designed to provide temporary protection from hot clouds, not from sustained exposure to large amounts of burning volcanic debris.

"The bodies were burned because of the hot temperatures in the bunker," Sutikno said.

One of the bodies was found on the floor, while the second was immersed in a bath. "He was trying to cool down," Sutikno said.

Efforts to reach the men a day earlier failed when fierce heat from the volcanic debris melted tires and rescuers' shovels.

Scientists had thought that the 9,700-foot Merapi was calming down after weeks of activity, but violent eruptions Wednesday led to the re-evacuation of thousands of villagers.

"It was the most terrifying cloud I have ever seen in my life," villager Basirun said of Wednesday's activity.

Ash covered one village 4½ miles west of the crater with a gray blanket an inch thick, and soot rained down after dusk across many districts, officials said.

Scientist Antonius Ratdomopurbo attributed the resurgence in activity to the collapse of a section of volcano's lava dome, which has been growing in recent weeks as lava emerges from its core.

Merapi is one of more than 70 active volcanoes in Indonesia.

The main dangers at Merapi are fast-moving bursts of blistering gases and rock fragments called pyroclastic flow. Experts say a massive vertical eruption threatening people many miles away will not occur.