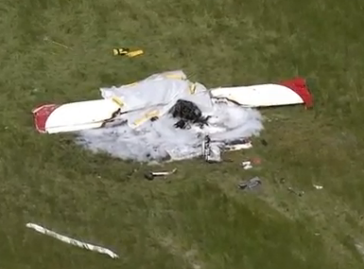 Police spokesman Cpl DaVaughn Parker said authorities received a call about 12:44 p.m. Tuesday about a plane crash on Kent Island. He says the aircraft burst into flames when it hit the ground near the Bay Bridge Airport not far from Stevensville. He said the plane is a Van's Aircraft RV-12, which, according to the company's website, is a two-seater that can be built from a kit or in a factory.

"I tried to help but plane was fully engulfed," one witness told CBS Baltimore's WJZ reporter Rick Ritter. "I saw two people inside and started screaming for them, but no one was moving. I wish I could've done more."

Parker said the two who died at the scene weren't immediately identified, according to the station.

Parker said the NTSB and FAA will investigate the crash.