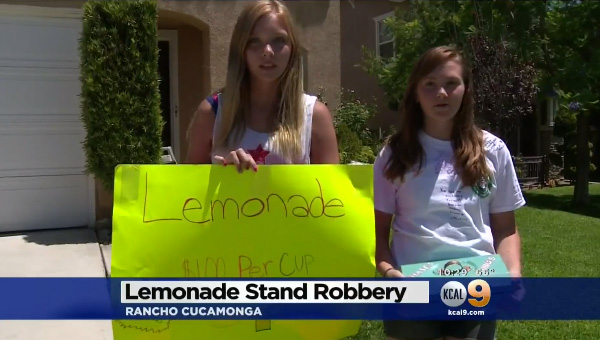 The Sheriff's Department says two 13-year-old girls had set up the stand Wednesday in Rancho Cucamonga when a man came up and said he had no cash, but wanted some lemonade.

The girls gave him some and the man began to walk away but then he came back, pushed over the stand and fled with the money box.

One of the girls told CBS Los Angeles that, "[The thief] just ran back and kind of pushed the table towards us and took the money and just kept running."

"We got up and started screaming, 'Come back!' And then this lady came by and she called the police," the other girl said.

That's when a brother of one of the girls and his friend came outside and started chasing the thief.

"We saw the dude with my sister's box and just ran after him," he said.

It took only minutes for a sheriff's deputy to find and arrest 18-year-old Santini Tate of Riverside on suspicion of strong-arm robbery.

Authorities say he was carrying $30 from the lemonade stand.

According to the station, the girls got back their cash box and money they earned in profits.

"My kid, my home, my neighborhood. I'm just wanting him to be dealt with his karma," said Jenny Paige, mother of one of the girls.

Tate is currently in jail.