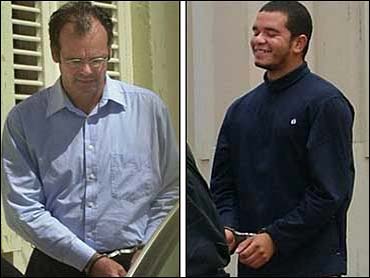 The father of a Dutch suspect arrested in the disappearance of an Alabama teenager was freed from jail on Sunday, hours after a judge ordered the release of a party boat disc jockey also held in the case.

Paul van der Sloot, a high-ranking justice official studying to be a judge on the Dutch Caribbean island, had been arrested Thursday as a suspect for collaborating in a crime with his 17-year-old son, according to his lawyer.

"A little bit of the nightmare clouds are now disappearing," van der Sloot's wife, Anita, told The Associated Press. "The truth will always come forward. From the beginning, I trusted everything would be fine."

Anita van der Sloot said the most important thing for her now "is that my son comes (out) free."

Earlier Sunday, a judge also ordered police to release Steven Gregory Croes, the party boat disc jockey held in the disappearance of Natalee Holloway, saying authorities did not have enough evidence against him, the man's lawyer said.

Croes, 26, was one of five people held in the case of the 18-year-old young woman last seen in the early hours of May 30. No one has been charged, including the last person reportedly seen with her, 17-year-old Joran van der Sloot.

Now that the case has drawn global attention there's tremendous pressure on the Aruban authorities to solve it. But they don't seem any closer now to finding Natalee Holloway than they were on the day she vanished, CBS News Correspondent Aleen Sirgany reports.

Croes, who was detained June 17, will be released Monday, said his lawyer, Eleni Lotter-Homan. He is a disc jockey on the party boat Tattoo, which offers nightly dining, dancing and swimming and docks near the Holiday Inn hotel where Holloway had been staying on Aruba, a Dutch protectorate.

"The judge agreed there is not enough proof he was involved to keep holding him," Lotter-Homan said.

"At this moment I don't know why," he told The Associated Press.

Elsewhere on the Dutch Caribbean island, volunteer rescuers from Texas led a sniffer dog over land and combed the ocean bottom with sonar in a renewed search for 18-year-old Natalee Holloway, who went missing nearly a month ago.

One volunteer admitted they're looking for a body.

The lawyer for one of two Surinamese brothers in court confirmed Saturday that Satish Kalpoe, 18, admitted lying to police when he told them that he and his brother and their Dutch friend dropped Holloway off alone at her hotel, the Holiday Inn, the night she disappeared.

Satish now claims that he and his brother, Deepak Kalpoe, 21, dropped Holloway and 17-year-old Joran van der Sloot off together at the Marriott hotel and then went home.

He lied initially "to help his friends, but said at a certain moment, 'I can't help you anymore,'" his lawyer, David Kock, told The Associated Press. He did not elaborate.

Joran's mother, Anita van der Sloot, 49, told the AP last week that he, too, had changed his story, admitting that he and Holloway were alone together at a beach. But she said he insists he left her there and did not hurt her.

"Basically today we're going to be doing both water and ground searches," searcher Joe Houston said. "We're also planning on doing drift searches, where we put four or five divers in the water - probably 20 yards apart - and they basically drift in a line doing visual searches in areas where the boat and the sonar can't really get in to."