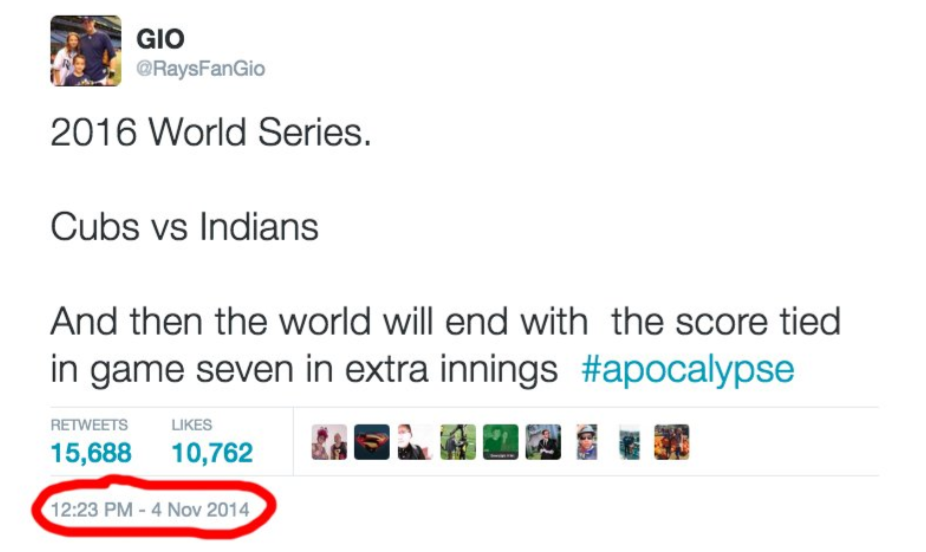 With the game neck and neck in the 9th inning of Game 7 of the World Series, both the Chicago Cubs and Cleveland Indians were holding their breath Wednesday night.

No one could have predicted this...right?

Apparently at least one person could.

A Twitter user correctly predicted the outcome back in 2014 -- well, he was partially correct, anyway.

On Nov. 4, 2014, user @RaysFanGio correctly predicted that the Cubs would play the Indians in the 2016 World Series -- and that’s not all. The social media user ventured a guess that there would be a Game 7, and that the standard nine innings wouldn’t be enough to determine a winner.

“2016 World Series. Cubs vs Indians. And then the world will end with  the score tied in game seven in extra innings #apocalypse,” he tweeted.

“How is this possible?” some users asked.

“This is literally the greatest tweet of all time,” another replied.

Several people claimed the tweet must be fake, but @RaysFanGio is assuring users that it is all too real.

The user, who has not yet identified himself, told CBS News he tweeted it the day Cubs manager Joe Maddon signed with the team.