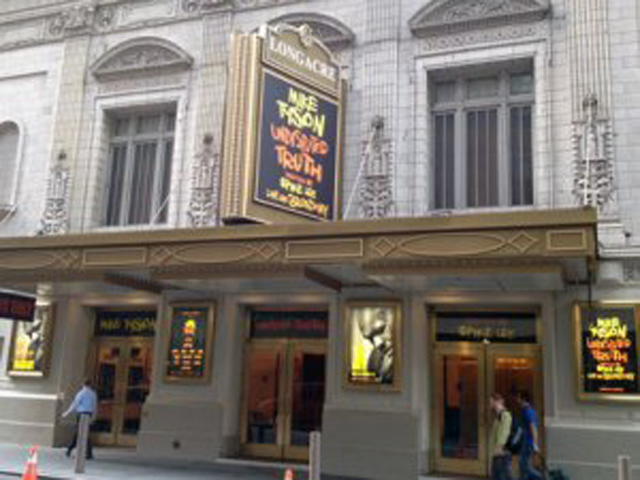 (CBS/WCBS) NEW YORK - The NYPD says it will subpoena Twitter Tuesday after discovering disturbing messages on Twitter threatening to carry out an Aurora-style shooting rampage at a Broadway theater where Mike Tyson is currently performing.

According to CBS New York, investigators with the NYPD intelligence division discovered the Twitter threats late Aug. 3 and into the early morning of Aug. 4, Deputy Commissioner Paul Browne says.

"I might just shoot up this theater in New York," one tweet by the user in question reportedly said.

"I know they leave their exit doors unlocked," said another tweet by the same user.

Others said, "I got 600 people on my hit list and that's gonna be a mass murder for real,"  and "I'm serious, people are gonna die like Aurora."

Police said it was the specific mention of the Longacre Theatre in Midtown that concerned them, reports CBS New York. The theater is where Mike Tyson's one-man show, "Undisputed Truth," is currently playing.

Browne reportedly said police contacted Twitter using a system established by the social media site for emergencies, but the social network site denied the request for the user's information claiming it didn't fall under the criteria of a serious threat.

"I'm not quite sure what their level would be when this person is threatening to go into a theater and kill people. It's certainly enough for us," Browne said. "We're getting a subpoena to order Twitter to produce that name."

According to CBS New York, while the investigation continues, heavily armed Hercules teams will keep an eye on the theater as a precaution.

A shooting in Aurora, Colo. last month at a screening of "The Dark Knight Rises" killed 12 and left 58 injured. Suspect James Holmes, 24, is charged with 24 counts of first-degree murder and 116 counts of attempted murder in the attack.