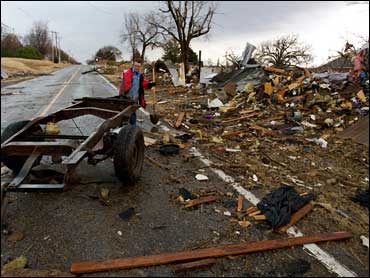 At least four people were killed and between 20 and 50 were injured by the tornado in Lone Grove, the state Department of Emergency Management said. The town of about 4,600 people is about 100 miles south of Oklahoma City.

Damage in the town was extensive and ambulances and other first responders from communities near Lone Grove were heading there, said Amber Wilson, the emergency management director for nearby Ardmore.

"Basically, all we have, it is pretty bad," said Chester Agan, assistant emergency manager for Carter County.

The National Weather Service said the tornado that hit Lone Grove was large and violent. At least two other twisters were confirmed, including one that damaged buildings in Oklahoma City and the northern suburb of Edmond.

At an Edmond business park, a body shop and the vehicles inside had been turned into a twisted ball of metal.

Shop manager Michael Jerry said he went home to eat and watch the weather reports as the storm moved into the area.

"It's just surreal," Jerry said. "You just don't believe it. Especially knowing you were just there minutes before. The steel girders are in a ball."

In northwest Oklahoma City, one wall of a Chuck E. Cheese restaurant collapsed, windows were blown out, and a piece of its awning was thrown into a tree. Signs were stripped and cars were damaged in the parking lot.

At the nearby Boulder Ridge Apartments, a large section of roof was blown off one building and part of a wall was blown off another. Parked cars were shifted by the wind and smashed into each other.

In between downpours of rain, residents wandered out to snap pictures of the wreckage or clear debris.

"My kids are still in the closet and won't come out," said Traci Keil, 37, as more rain started.

Oklahoma Gas and Electric had 28,500 customers that lost power, mostly in the Oklahoma City area, according to its Web site. Eighteen power poles were snapped.

The Oklahoma County Election Board was preparing to tally votes for a school board election when power went out.

Election materials will be locked up overnight and workers will start counting ballots Wednesday, board secretary Doug Sanderson said.

"Basically we're shut down," Sanderson said. "I don't think there is anything anybody can do for us. It's a pretty extensive outage."

A severe weather watch was posted for Oklahoma through early Wednesday.

Straight-line winds also damaged homes in the state and in Texas. Dust storms reduced visibility in western Texas so much that some roads were closed. Power was knocked out and minor building damage was reported.

Hamilton County authorities in north-central Texas said they had widespread power outages and downed trees, though there no immediate reports of damages to businesses or homes.

Volunteer firefighters were out checking for damage. Power outages and downed trees also were reported in nearby Bosque County.

The Waco Tribune-Herald reported roof damage at a vacant shopping center and metal roofing strewn near a restaurant in Waco. In a Fort Worth suburb of Colleyville, several homes were damaged.