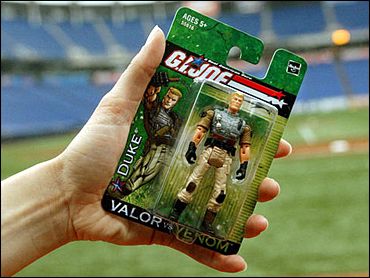 The Minnesota Twins will present Duke, "the calm and determined battlefield commander of the G.I. Joe team," at Monday night's game against the Kansas City Royals in the first patriotic giveaway in the major leagues this season.

"I think the Twins are way off base with this idea," said John Varone, a Vietnam veteran and president of the Twin Cities chapter of Veterans for Peace. "For gosh sakes, the last place we need to promote war is at our national pastime."

The Twins say Joe isn't glorifying war, but celebrating the efforts of servicemen and women. As part of that mission, the team asked Duke's maker, Hasbro Inc., to remove the customary gun from his side. Hand grenades are still visible.

"I know there are people who are adamant about opposition to the war, but this is not about politics," Twins marketing vice president Patrick Klinger said.

The Twins will also admit current and former military personnel and their families at half price Monday, as part of what the Twins call Armed Services Appreciation Day. Gov. Tim Pawlenty will attend a flag ceremony before the first pitch.

The Twins' first such day was held last year, just before the Iraq invasion, when a soldier from Minnesota threw out the first ball to a fellow soldier from the state. The throw and catch occurred in Kuwait and were broadcast to Minnesota at the beginning of the game.

"I looked around the ballpark that night and there were tears everywhere," Klinger said. "It was the highlight of my career."

Still, more than one peace group believes the G.I. Joe giveaway is a big mistake and want the Twins to cancel the promotion.

"It's not a credible way to honor those who've suffered the inhumanity of war," said Phil Steger, executive director of Friends for a Non-Violent World, a St. Paul-based group with about 4,000 members in Minnesota.

Klinger stands by his decision to go with the military figure.

"I was looking for something unique that would pay tribute to Minnesota soldiers," he said. "I thought G.I. Joe was perfect for that."

Reacting to the discontent of the peace groups, the Minnesota National Guard threw its support squarely behind the Twins.

"We're sorry that a small number of Minnesotans are offended by the doll and don't see it as the tribute that it really is," said Col. Denny Shields, a spokesman for the Guard.