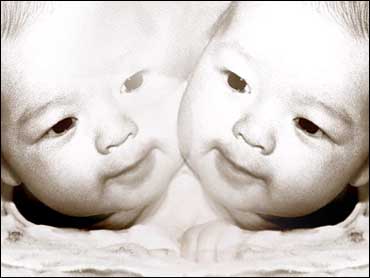 Twins Mary Maurer and Melanie Glavich grew up doing everything together. Now their sons can follow suit.

The sisters gave birth to sons 35 minutes apart on Thursday.

Maurer and Glavich say they weren't surprised to share the same due date, May 27, for their second babies.

But the sisters both went into labor early. They entered the hospital at 6 p.m. Wednesday and delivered a few hours later in side-by-side rooms at Southwest General Health Center in Middleburg Heights, about 15 miles southwest of Cleveland.

Grandmother Cheryl Prosser ran back and forth between the rooms.

"I felt guilty about not being with each girl all the time, but it worked out," she said. "I took digital pictures of the babies to show each girl."

Prosser's delivery of the sisters 23 years ago had its own twist: She didn't know she was having twins.