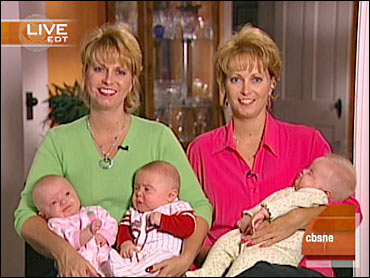 For five of the six years Darla and Mark Pritchard were married, they were trying to start a family.

Two attempts at in-vitro fertilization had failed, and they were about to make a third try when Darla's twin sister, Dana Johnson, offered to be a surrogate, to up the odds of success. Darlas and Mark took her up on the offer.

It turned out both women, 39, got pregnant when Mark's fertilized eggs were implanted.

On Feb. 27, Darla gave birth to twins, Mallory and Wesley and, six weeks later, Dana had a girl, Mattie.

They're considered triplets and biological siblings.

All three will be raised by Darla and Mark.

Darla and Dana told all about it on The Early Show Tuesday.

"My family had just felt so helpless, for so long," Darla said, "watching me depressed (because of my inability to conceive) and all that, and Dana was the only one who felt like she could help, and she offered to carry a baby for us."

"They're from the same batch of eggs, same batch of sperm, and so they are considered triplets -- they just have different birthdays," Darla continued.

"I'll have to adopt Mattie. Legally, in Missouri, Dana's the mother."