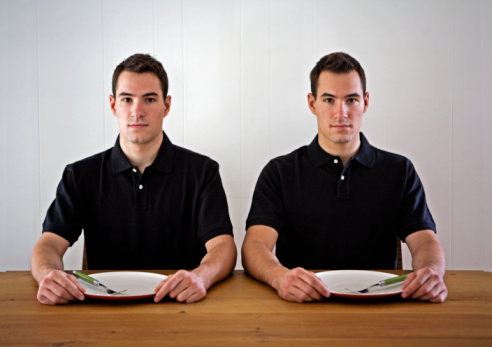 Jim Lewis and Jim Springer were identical twins raised apart from the age of 4 weeks. When the twins were finally reunited at the age of 39 in 1979, they discovered they both suffered from tension headaches, were prone to nail biting, smoked Salem cigarettes, drove the same type of car and even vacationed at the same beach in Florida.

The culprit for the odd similarities? Genes.

Genes can help explain why someone is gay or straight, religious or not, brainy or not, and even whether they're likely to develop gum disease, one psychologist explains.

Such broad-ranging genetic effects first came to light in a landmark study -- Minnesota Twin Family Study -- conducted from 1979 to 1999, which followed identical and fraternal twins who were separated at an early age. [Seeing Double: 8 Fascinating Facts About Twins]

"We were surprised by certain behaviors that showed a genetic influence, such as religiosity [and] social attitudes," said Nancy Segal, an evolutionary psychologist at California State University, Fullerton, who was part of the study for nine years. "Those surprised us, because we thought those certainly must come from the family [environment]," Segal told Live Science. Segal described the groundbreaking research on Aug. 7 here at a meeting of the American Psychological Association.

The Jim twins were probably the most famous set of twins involved in the study, but other pairs were equally fascinating. One pair of female twins in the study were separated from each other at 5 months old, and weren't reunited until age 78, making them the world's longest separated pair in Guinness World Records.

The Minnesota study resulted in more than 170 individual studies focusing on different medical and psychological characteristics.

In one study, the researchers took photographs of the twins, and found that identical twins would stand the same way, while fraternal twins had different postures.

Another study of four pairs of twins found that genetics had a stronger influence on sexual orientation in male twins than in female twins. A recent study in Sweden of 4,000 pairs of twins has replicated these findings, Segal said. [5 Myths About Gay People Debunked]

A 1986 study that was part of the larger Minnesota study found that genetics plays a larger role on personality than previously thought. Environment affected personality when twins were raised apart, but not when they were raised together, the study suggested.

Reporter Daniel Goleman wrote in The New York Times at the time that genetic makeup was more influential on personality than child rearing -- a finding he said would launch "fierce debate."

"We never said [family environment] didn't matter," Segal said at the APA meeting. "We just made the point that environment works in ways we hadn't expected."

Another study, commissioned by the editor of the journal Science, looked at genetics and IQ. The Minnesota researchers found that about 70 percent of IQ variation across the twin population was due to genetic differences among people, and 30 percent was due to environmental differences. The finding received both praise and criticism, but an updated study in 2009 containing new sets of twins found a similar correlation between genetics and IQ.

Moreover, a study in 1990 found that genetics account for 50 percent of the religiosity among the population -- in other words, both identical twins raised apart were more likely to be religious or to be not religious, compared with unrelated individuals.

Other studies found a strong genetic influence on dental or gum health. That research helped to show that gum disease isn't just caused by bacteria, it also has a genetic component, Segal said.

Another study found that happiness and well-being had a 50 percent genetic influence.

In another study, researchers surveyed the separated twins about how close they felt to their newfound sibling. Among identical twins, 80 percent of those surveyed reported feeling closer and more familiar with their twin than they did to their best friends, suggesting a strong genetic component in the bond between identical twins.

The Minnesota study gave scientists a new understanding of the role of genes and environment on human development, Segal said. In the future, twin studies will aim to link specific genes to specific behaviors, as well as investigate epigenetics -- what turns genes on or off, she said.

Playing God: "We are in the midst of a genetic revolution"
Thanks for reading CBS NEWS.
Create your free account or log in
for more features.
View CBS News In
CBS News App Open
Chrome Safari Continue
Be the first to know
Get browser notifications for breaking news, live events, and exclusive reporting.