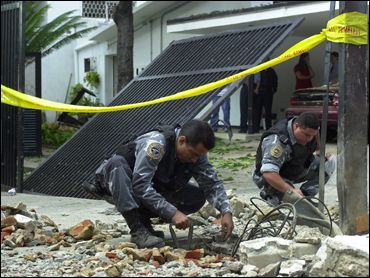 Broken glass covered the street outside both buildings and their steel gates were twisted by the force of the blasts. Windows in residences almost a block away were blown out.

"There's a direct relation between the two explosions," Diaz said.

The first blast was outside the Spanish Embassy in eastern Caracas at about 2 a.m. The second explosion, 15 minutes later, rocked the Colombian Consulate. The blasts lightly injured four people, including a night watchman, Lopez said.

"It was the first (explosion) of such magnitude to occur in the country," Diaz said

The explosions came two days after Chavez warned Colombia and Spain, among other countries, not to meddle in Venezuela's domestic affairs.

Both nations had expressed concern over the arrest of opposition leader Carlos Fernandez, who was detained last week for his role in leading a two-month general strike against Chavez.

The strike brought Venezuela's economy to a virtual standstill and crippled production in the country's all-important oil industry. Opposition leaders staged the protests in hopes of getting Chavez to step down or hold early elections.

Federal agents are trying to hunt down another opposition leader, labor boss Carlos Ortega, who is also wanted for alleged crimes linked to the work stoppage.

Human rights groups have raised alarm not only about the arrest of pursuit of the strike leaders but also concerning the murder of three dissident soldiers and a civilian activist last week. The bound and gagged bodies of the four were found showing signs of possible torture.

In a briefing Monday, State Department spokesman Philip Reeker said the U.S. was "concerned, I think given the current situation of the last few days, that heightened political rhetoric has contributed unnecessarily to some of the recent violence in Caracas."

Last week, the State Department eased its travel warning to U.S. citizens in or headed to Venezuela, but said there were "continuing concerns."

Authorities said no arrests had been made in the two explosions.

A statement issued by the Colombian Embassy in Caracas condemned the blasts and urged other governments to join the struggle against terrorism.

"In an emphatic manner, the Colombian government rejects any manifestation of violence or terrorism and calls for uniting efforts in its fight (against terrorism)," it said.

"We would never encourage any actions like this," said Saab. "This type of action is reprehensible … and repudiated by all of us in the government."

Chavez responded angrily Sunday to foreign critics of his pressing charges against the two strike leaders. He directed warnings at some members of a "Group of Friends" initiative created to bolster the negotiating process.

"Don't mess with our affairs!" Chavez said, singling out Cesar Gaviria, secretary general of the Organization of American States, the United States, Spain and Colombia.

On Monday, opposition representatives sent a letter to Brazilian Foreign Minister Celso Amorim, coordinator of the "Friends" group, calling for an urgent meeting to discuss "the worsening of the Venezuelan situation."

"This shouldn't affect relations between the Friends of Venezuela," said Saab.

Venezuelan Deputy Foreign Minister Arevalo Mendez said the government would launch an investigation into the bombings and bring those responsible for the attacks to justice.

"We will find those responsible for this crime," said Mendez.

The opposition says Chavez has ruined the economy and is amassing power in his own hands. The leftist former paratrooper accuses his critics of trying to spark a coup.

Negotiations between the government and the opposition were suspended last week because Gaviria had commitments abroad, but are to resume Wednesday.