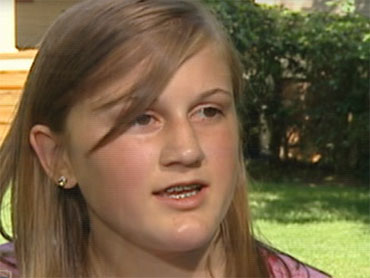 A recent study found that 81 percent of 10-year-old girls are afraid of becoming fat, and that many feel better about themselves when they're on a diet.

Anorexia is affecting pre-teens more than ever, CBS News correspondent Terrell Brown reported on "The Early Show" Tuesday. And the battle to overcome the eating disorder for "tweens" can be devastating, Brown says.

Ten-year-old Shae Walker was an accomplished gymnast, practicing up to 16 hours a day. But when she decided to quit and focus on her studies and social life, Shae said, she began to have bad thoughts about her weight.

"Probably a month after quitting," Shae's mother, Michele Walker, said, "she would look in the mirror and make comments to me saying she was fat."

Michele told her daughter that was ridiculous.

But Shae began to believe she was getting fat.

"I would pinch the fat on my stomach or what was probably skin," she said. "When I looked in the mirror, it looked to me that I was getting fatter or I was fat. ... I was seeing every imperfection that I had. ... I got a feeling like I wasn't good enough anymore."

Shae refused to eat anything but salad. She exercised compulsively and wore baggy clothes to hide her shrinking frame from family and friends. In just three months, Brown reported, she dropped from a healthy weight of 85 pounds to just 68.

Michele was so desperate, she took a photo to show Shea just how thin she'd gotten.

"It was like I was seeing somebody totally different," Shae said, "because that, compared to the person I saw in the mirror, were way different."

"I felt like, I had almost two personalities," Shae said. "The one that wanted to get better and the one that didn't."

Michele said her daughter mentioned she wanted to die, so it would all just end.

Brown said the situation soon became one of life-and-death. The Walkers checked Shae into an eating disorders clinic, where she was attached to a feeding tube. And there, Shae confronted her fears.

After months of therapy, Shae overcame anorexia, and the negative thoughts began to fade. Now 13, Shae has a different view of life.

"I feel confident now," she said. "I can accept myself, no matter how I look."

But many children are experiencing the same things, according to Elizabeth Shaw, executive editor of Parenting magazine.

Shaw told "Early Show" co-anchor Maggie Rodriguez teaching your kids to eat well and giving them a positive self-image early-on is a start to keeping your kids healthy.

She added that, in some cases, family history of anxiety, depression perfectionism and compulsive disorders may contribute to anorexia.

"When you take this predisposition, combine it with dieting, the calorie restriction and the excessive behaviors can really quickly morph into a disorder," she said.

"I remember when I was a teenager," Rodriguez said, it was bad enough. Now it's even worse."

"(Children are) bombarded and one of the scary things is that some of that anti-obesity message kids are getting in schools sometimes can backfire," she said. "Very healthy kids can become very paranoid about eating fattening foods."

Shaw also suggested parents look for warning signs from their children, such as disruptions in their normal personality like withdrawn, anxious or depressed behaviors.

Shaw added secretive behavior, such as disappearing after a meal to take a shower, are also red flags. Some children use this ruse, she said, to mask their purging.

Shaw said parents should also be watching if their children cut out major food groups or exercise excessively.

If parents notice behaviors like these, Shaw said, parents can start by having the child's doctor talk about the importance of eating from all the food groups, but if it's more serious, she suggested the child may need to be hospitalized.

For more from Parenting.com on tweens and anorexia, click here.