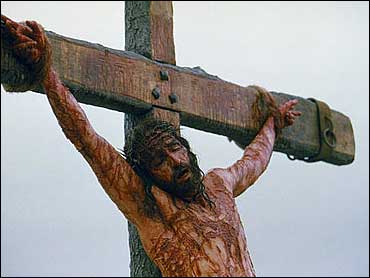 Despite being the year's biggest box-office blockbuster so far, "The Passion of the Christ" seems unlikely to find a home on the four biggest broadcast networks.

Mel Gibson's Icon Productions has been shopping the movie to TV. Only ABC has confirmed turning it down, but executives speaking on condition of anonymity said it was doubtful for CBS, NBC and Fox, too.

The movie's graphic scenes of Jesus Christ's crucifixion were said to make broadcasters skittish, particularly in the post-Janet Jackson era when government officials are closely watching what goes on television.

"There might be a lot of baggage because of the violence," said Brad Adgate, an analyst for the ad buying firm Horizon Media. "That can put some pressure on advertisers not to buy this."

Fox is awaiting the evaluation of its broadcast standards department before making a decision on whether to pursue airing it, the network's entertainment chief, Gail Berman, said.

The Hollywood agent who's offering a licensing deal to networks on behalf of Icon, Jeff Berg, would not comment on any negotiations.

"The Passion of the Christ" has earned $360.9 million domestically since its Feb. 25 opening.

In an era when networks and studios and have tie-in deals that govern where many theatrical releases will first be seen on television, Gibson's movie is a rare free agent. Movie licensing fees are usually tied to box-office success, which would seemingly put "The Passion" in position for a lucrative payday.

There's a chance that some of the initial network coolness toward proposals by "Passion" producers could simply be a negotiating tactic.

NBC and CBS executives confirmed they had been pitched the movie but declined to comment further.

"We're not doing it," ABC entertainment spokesman Kevin Brockman said. He would not say why the network turned down "The Passion."

Besides the film's violent content, a television network that airs "The Passion" would also inherit controversy about it. Some Jewish organizations objected to the movie for fear it would cause bad blood between Christians and Jews.

NBC aired the Holocaust tale, "Schindler's List," uncut and without commercial interruption in February 1997, a broadcast sponsored by Ford. NBC estimated 65 million people saw all or part of the film.

Content issues aside, broadcast networks have been de-emphasizing theatrical movies in recent years, figuring many viewers prefer seeing them in theaters, on DVD or on commercial-free cable.

The movie has also reportedly been shopped to pay cable networks, where content would not be much of an issue. HBO would not comment, but executives there have privately said the network has a full plate of movie premieres already scheduled for the next year.

Showtime has passed on the movie, a network spokesman said.

The Starz pay cable network hasn't made a decision. The network may be hindered by money troubles; it announced last year it was cutting 100 jobs and closing four regional offices.

Whether or not to air "The Passion" will be a programming decision, not a financial one, spokesman Tom Southwick said.

Brent Bozell, the founder of the conservative media watchdog group, the Parents Television Council, said if broadcast networks turned down "The Passion" because of disturbing scenes, "then there is rampant hypocrisy in the halls of Hollywood.

"There doesn't seem to be a problem with other violent content," he said.

The PTC has called on TV networks to stop airing graphically violent material. But it sent an alert to all of its members earlier this year urging them to go to the theater to see "The Passion."

The movie "may be violent, but it is also one of the most beautiful, powerful and instructive movies ever made," Bozell said.

He said the PTC wouldn't endorse or oppose putting "The Passion" on television.