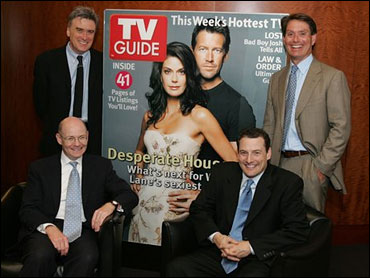 TV Guide is slashing the circulation it guarantees advertisers by about two-thirds and relaunching itself as a large format magazine with far fewer TV listings and more emphasis on lifestyle and entertainment, the magazine announced Tuesday.

TV Guide also said it would cut jobs as part of the revamp, but it did not say how many.

The radical changes to TV Guide come as it struggles to remain relevant in an age where many TV viewers get their TV listings from on-screen guides provided by their cable companies or on the Internet.

The magazine currently guarantees 9 million readers to advertisers, according to its most recent filing with the Audit Bureau of Circulations. But the new guarantee will be set at just 3.2 million, which partly reflects the elimination of 3 million in "sponsored" sales or circulation paid for by third parties, a category that has come under scrutiny by the ABC, a circulation watchdog agency.

As part of the changes, TV Guide's parent company, Gemstar-TV Guide International Inc., said it expected to incur losses of up to $110 million in its 2005 and 2006 fiscal years, which also include losses from its recently launched title Inside TV, a celebrity magazine for younger viewers which the company said is not performing as well as expected.