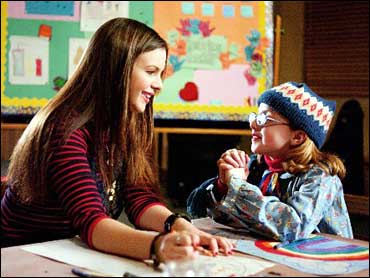 Television entertainment programs mention God more often than they did in the mid-1990s but tend to depict organized religion negatively, a study released Thursday said.

The Parents Television Council watched every hour of prime time on the broadcast networks during the 2003-04 season and logged 2,344 treatments of religion. They judged 22 percent of the mentions positive, 24 percent negative and the rest neutral.

The conservative group's last study, released in 1997, found far fewer mentions of the topic - an average of once per hour compared to three times per hour last season.

But any mention of a religious institution or member of the clergy was at least twice as likely to be negative than positive, the council said.

"Ninety percent of the American people believes in God," said Brent Bozell, the council's president. "It is an important issue to most people. Hollywood is attacking the very thing that they consider important in their own lives. Perhaps Hollywood ought to be changing its world view."

Negative examples varied widely: from comic Jimmy Kimmel joking on the American Music Awards that winners should resist thanking God, to a Catholic priest admitting on "The Practice" that he had had sex with a woman who was later murdered.

"Catholicism is in the bulls-eye of the entertainment medium," Bozell said.

His group singled out NBC, saying its mentions of religion were nearly 10 times more likely to be negative than positive. "Law & Order" episodes, which tend to have stories ripped from the headlines, helped skew those numbers, the group said.

Bozell noted, however, that one of the negative NBC examples the PTC cited - Karen on "Will & Grace" quipping, "Let's go by that historic church and turn it into a gay bar" - reflected as poorly on the character as on religion.

An NBC spokeswoman, Shannon Jacobs, said the network hadn't seen the study but rejected its conclusion. NBC's programming reflects the diversity of its audience, she said.

"It is never our intention to appear, nor do we accept the notion that we are, anti-religious," she said.

Among the positive examples, the PTC cites a "JAG" episode where a character prays to God to say hello to her dead mother, and an "American Dreams" episode where an actor playing a medical student says a surgery is partially in God's hands.

Bozell said he's not suggesting that all television programming "ought to be about St. Teresa" or even be all positive about religion, but that Hollywood should keep in mind the overall picture it presents to viewers.