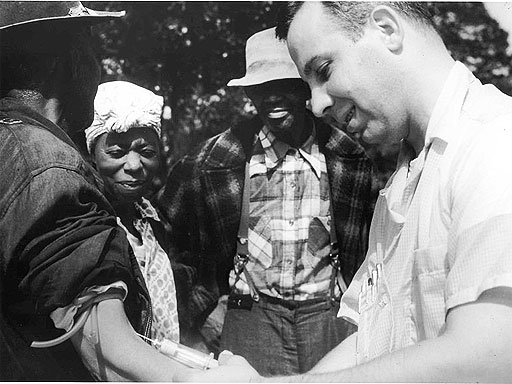 (CBS/AP) Sorry for giving you syphilis.

That's the kind of thing one lover might say to another, but now the U.S. is making that apology to Guatemala - after it was revealed that American scientists deliberately infected Guatemalan prisoners and mental patients with syphilis 60 years ago.

The U.S. government-funded experiment, which ran from 1946 to 1948, was discovered by a Wellesley College medical historian. It apparently was conducted to test whether penicillin, then relatively new, could prevent infection with sexually transmitted diseases.

The study came up with no useful information and was hidden for decades.

The government researcher who led the work in Guatemala, Dr. John Cutler, also was involved in this country's infamous Tuskegee experiment, where, from 1932 to 1972, scientists tracked 600 black men in Alabama who had syphilis but didn't know it, without ever offering them treatment.

"We are outraged that such reprehensible research could have occurred under the guise of public health," Secretary of State Hillary Rodham Clinton and Health and Human Services Secretary Kathleen Sebelius said today.

In Guatemala, 696 men and women were exposed to syphilis or in some cases gonorrhea, through jail visits by prostitutes or, when that did not infect enough people, by deliberately inoculating them, reported Susan Reverby, the Wellesley historian. Those who were infected were offered penicillin, but it was not clear how many were infected and how many were treated successfully.

Strict regulations today make clear that it is unethical to experiment on people without their consent and require special steps for any work with such vulnerable populations as prisoners. But such regulations did not exist in the 1940s.

The U.S. government ordered two independent investigations to uncover exactly what happened in Guatemala and to make sure current bioethics rules are adequate. They will be led by the prestigious Institute of Medicine and the Presidential Commission for the Study of Bioethical Issues.

While deliberately trying to infect people with serious diseases is abhorrent today, the Guatemalan experiment is not the only example from what National Institutes of Health Director Dr. Francis Collins today called "a dark chapter in the history of medicine." He said 40 similar deliberate-infection studies were conducted in the U.S. during that period.