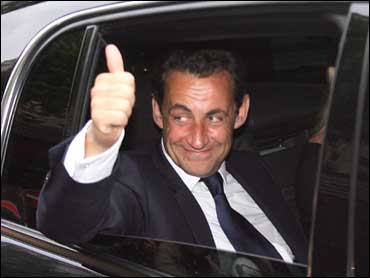 Six months ago Johnny Hallyday, the "French Elvis," announced that he was taking up Swiss citizenship to escape France's high tax rates, which absorbed about two-thirds of his income. Because Hallyday was known to be a supporter of then-candidate Nicolas Sarkozy, a political row immediately burst out. Showing some political courage, Sarkozy did not disavow Hallyday; instead he declared that the singer was quite justified. If he won the election, said Sarkozy, he would cut tax rates to entice France's high earners back home.

That promise was important to many more people than Johnny Hallyday. Something like half a million young French people are estimated to be living in southern England. The Kent Corridor from London to Dover is known, ironically, as "France's Silicon Valley." And for every Parisian exile, 10 actual Parisians still seethe under high taxes and think about emigration. That sums up why Sarkozy won Sunday's election.

Indeed, he did more than simply win an election. By any normal standard Sarkozy has established a clear mandate for sweeping conservative reform in France. He won the presidency by six points in an election that attracted a massive 85 percent turnout. He owed nothing of his victory to other parties or candidates — both the centrist François Bayrou and the ultra-rightist Jean-Marie Le Pen refused to support him. He made no secret of the character and extent of his reform program — indeed, as the Hallyday incident demonstrates, he rammed them home with enthusiasm. And it seems likely that he will be granted a friendly National Assembly with a large conservative majority in the forthcoming parliamentary elections.

So, if representative democracy works as it is supposed to do, Sarkozy will push through the market reforms that France has needed for at least two decades. He will deregulate its labor market, slim down the public-sector payroll, abandon the symbolic 35-hour work week, reduce public spending from its current 52 percent of GDP, and reform the French welfare state. Friends and admirers of France will hope that he succeeds. Americans will be especially supportive since he has said that with his election the U.S. has a "friend" — presumably he will end the anti-Americanism that has shaped French foreign policy under Jacques Chirac, his old patron and recent bitter rival. But will Sarkozy be able to push through such an ambitious and contentious program against opposition in the streets as well as in the corridors of power?

To say the least, it will be a high-risk project. In his first comments on the election, Sarkozy acknowledged that a passionate 47 percent of Frenchmen had opposed him. He denied that his victory was that of "one France over another" — even though the success of his program will require precisely that. He talked of the value of "social protection" and warned the European Union not to intrude on France's social programs. (Sarkozy supports the European Constitution that the French rejected last year because they believed it would dismantle such programs.) Even if these remarks are merely the usual pseudo-generosity that winning politicians show to the other side to soothe their hurt feelings, they nonetheless suggest the scale of Sarkozy's task.

That task is made harder and more complicated by non-economic problems — notably immigration and national identity. Young people in the banlieues around major cities, either immigrants or the descendants of immigrants, are disproportionately unemployed because of France's inflexible labor market. Economically and socially excluded, they fall prey to extremist ideologies, generally Muslim ones, and reject their identity as Frenchmen. That makes them less employable. To make matters worse, they are likely to fight against the very measures of labor-market flexibility that could help them.

Sarkozy's greatest problem, however, is that with all its problems France is stable. Those Frenchmen in work, especially those in the public sector, have a guaranteed comfortable existence even under high tax rates. France has not yet suffered a "winter of discontent" — a collapse of the economy under strikes and labor unrest similar to the one that persuaded the British that there was no alternative to Thatcher's economic and labor reforms. Taxes are high, jobs are scarce, and cars are burning in the banlieues, but life is far from unendurable. Most Frenchmen still see no urgent reason to change. Some will fight to protect their subsidies — the middle class in politics and cultural debate, the labor unions in the streets. Others who now favor Sarkozy's program may abandon his cause when it becomes too much trouble.

None of this means that the Sarkozy's reforms are doomed — merely (though it's a big "merely") that their success depends to a very great extent on Sarkozy personally. Sunday he beat all sides — including most leaders of his own party — to win the presidency. He is clearly a resourceful and tough politician, as well as a clear economic thinker. He will need all his talents — and more — to win this Battle of France.