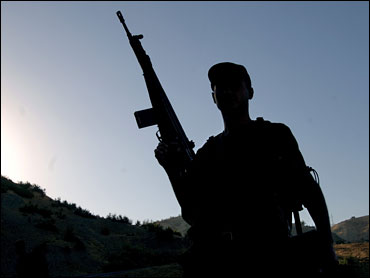 The Turkish military said Saturday that it fired on a group of between 50 and 60 Kurdish rebels inside Iraqi territory, inflicting "significant losses."

The military said on its Web site that the rebels were detected following intelligence work and that military operations in "the region" would continue if necessary. It did not say whether Turkish troops crossed into Iraq as part of the operation.

Prime Minister Recep Tayyip Erdogan said on Friday that the government had granted authorization to its military to begin a cross-border offensive against Kurdish rebels based in northern Iraq at any time.

"There was an intensified operation against the mentioned terrorists using fire support vehicles," the military statement said. "It is observed through technical means that the terrorist group suffered significant losses as a result of the operation."

The statement also said: "If necessary, there will be other operations in the region, using other means."

Erdogan's announcement on Friday followed communication in recent weeks between the military and the government concerning the scope of a possible operation against the Kurdistan Workers' Party, or PKK. A top general had said the military was awaiting a government directive on how to proceed against the group, which has been fighting the Turkish state since 1984.

Parliament voted Oct. 17 to authorize the government to order a cross-border operation against the PKK, which seeks autonomy for the Kurdish minority in southeastern Turkey.

Turkey has massed tens of thousands of Turkish troops along the border with Iraq amid a series of attacks by Kurdish insurgents. But some military officials have said Turkey is more likely to stage air strikes and raids by special forces instead of a large-scale occupation of Iraqi territory that could carry greater military and political risks.

The United States and Iraq urged Turkey to avoid a major operation against PKK bases in northern Iraq, fearing such an operation would destabilize what has been the calmest region in the country. In a Nov. 5 meeting with Erdogan, President Bush promised to share intelligence on the PKK with the Turkish government.