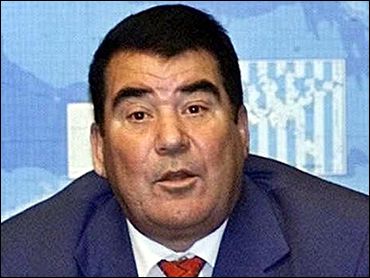 He's not only a brutal dictator, but a dictator who runs his country like it's his own private Disney World. That country, Turkmenistan, is a former Soviet republic sitting strategically between Iran and Afghanistan. And the man who runs it is Saparmurat Niyazov.

He's known by his citizens, and by decree, as "Serdar Turkmenbashi" - which means "Great Leader of all Turkmen." Correspondent Bob Simon reports.

If you think Saddam Hussein was fond of himself, just visit Turkmenbashi's country. There's a poster or a statue of him in nearly every public space.

When Soviet rule collapsed in 1991, Turkmenistan was left on its own, with no real government, and no national identity. Turkmenbashi filled that void. He built a nation and a culture based on him.

The golden likeness of the former communist party boss-turned-dictator is in the center of the capitol, always rotating to face the sun. His picture is on the airplane that brings you to the main port town called Turkmenbashi. It watches over workers in the field, over children in school, over drivers on the road. He's also on the money, and he's even on the national vodka.

His face is everywhere, and you can't walk a block without seeing either a statue or photo of him.

"If I was a worker and my president gave me all the things they have here in Turkmenistan, I would not only paint his picture, I would have his picture on my shoulder, or on my clothing," says Turkmenbashi. "I'm personally against seeing my pictures and statues in the streets - but it's what the people want."

It's hard to really know what the people want in this country, when you're shadowed by a burly minder. But since Turkmenistan sits atop one of the world's largest gas reserves, it's safe to say they'd like a piece of that wealth. It's also safe to say they don't get it.

Half the country lives in poverty. And Turkmenistan has the highest infant mortality rate in the region and the lowest life expectancy. Jobs are few and far between, and religious freedom? Well, Turkmenbashi knocks down churches.

Laura Kennedy, who was U.S. Ambassador to Turkmenistan when 60 Minutes visited, says dealing with Turkmenbashi is not unlike dealing with North Korea's Kim Jong-il, or the former Iraqi leader Saddam Hussein.

"Here, you have to make a written request for virtually any meeting you have," says Kennedy, who adds that requests are not always accepted.

And, she says, it's not because there's some vast bureaucracy in the way. Turkmenbashi controls everything in this country. He personally decides who comes in, who goes out, who gets into university, and who does not. There's also no press freedom, since he controls the newspapers and television.

Turkmenbashi is so controlling that he has even rewritten the calendar, and he recently renamed the month of January to "Turkmenbashi." April is named after his mother.

"There's no harm done. You can't have a great country without great ancestors - and we had none before," says Turkmenbashi. "We're starting new, with a new society, and this new culture will be followed for centuries."

In this secular Muslim nation of five million people, the new "Koran" of this new culture is a giant book which ceremonially opens every night at dusk. It's called the Ruhnama, the president's spiritual guide for the people of Turkmenistan, and it lists suggestions for better living through Turkmenbashi.

"The trouble is that rather than being one of many explorations and celebrations of the new future, it's displacing everything else. It's being taught almost as theology," says Kennedy.

Every kid in school here, young and old, must spend one day a week studying the Ruhnama. Why must all children read it?

"Please read the Ruhnama and you will find the answers to all your questions. The Ruhnama is not a book to replace the Qur'an," says Turkmenbashi. "It simply explains how the Turkmen nation has been reborn."

If you're wondering why anyone in America should care about this strange and faraway place, the answer is over the hill in Iran and Afghanistan -- where Turkmenbashi sits between two hot spots.

Back in the '90s, an American oil company, Unocal, hired heavy-hitters like Henry Kissinger to tap into Turkmenistan's huge natural gas reserves via a proposed pipeline through Afghanistan. That deal fell through because of the Taliban. But today, Donald Rumsfeld is another heavy-hitter who's lobbying for Turkmenbashi's help. Rumsfeld made a quiet visit here last year to urge the Turkmen dictator to help with the on-going battle against the Taliban next door.

"This went from being a fairly remote state ,in terms of America's interest, to a front line state sharing a long border with Afghanistan," says Kennedy. "Officially, they're working with us, but frankly, we would like to see a more proactive position on their part on this and other issues."

Although Kennedy says Turkmenbashi has offered minimal help to the U.S. overflight and refueling rights, the state department says that drugs - a backbone of the Taliban's terrorism financing - are flowing across Turkmenistan's 500-mile-long, mostly-unsecured border, en route to lucrative markets in Europe.

Congress has even held hearings on the matter.

"Turkmenistan has already made some of the definitions of narco-states," says Dr. Martha Brill Olcott, a leading expert in the region. "I believe that drugs transit through Turkmenistan and that part of the money for it goes to the top. That he at least is aware of it and doesn't stop it is, is very hard not to believe. I mean, nothing goes through Turkmenistan that he has not at least tacitly approved."

"There is clearly a potential there for transit, for example. So one of our interests here is to work with them to enhance security and monitoring along their borders," says Kennedy.

But are we willing to overlook human rights abuses to win the war on terror?

"I would reject that completely," says Kennedy.

While it's true that Kennedy and past ambassadors have privately pushed Turkmenbashi to grant his people more freedom, it wasn't until last November that the calls for human rights took on some urgency – when Turkmenbashi's motorcade was fired upon by a group of dissidents. Turkmenbashi escaped unharmed, but the same can't be said of the dissidents.

"Turkmenistan's most wanted terrorists were planning a political coup against me, because we supposedly ban people's rights. That's ridiculous," says Turkmenbashi.

The plot failed, but Turkmenbashi used the opportunity to arrest his former foreign minister, along with hundreds of others for their alleged roles in the plot.

Among them was a U.S. citizen, a Soviet-born American businessman named Leonid Komarovsky, who had the misfortune of being friends with one of the coup plotters. With the help of the U.S. ambassador, Komarovsky was eventually freed - but only after five harsh months of Turkmenbashi hospitality.

What did they do to him?

"Beating, first of all. Of course, beating," says Komarovsky. "They beat me with big stick, like baseball."

But there was more than just beatings. Komaravsky says he was also drugged and forced to read a statement: "I said I was with these people who made this very bad act. And there are bandits and terrorists and they must be in prison."

According to human rights groups, all the alleged coup plotters were forced to make similar forced confessions. They were all broadcast, Turkmenbashi style, on a three-story-high screen before the parliament as a warning to Turkmenbashi's enemies.

"All the coup plotters accepted responsibility, and we don't need any other evidence. We don't have innocent people in jail in Turkmenistan," says Turkmenbashi.

But would it be fair to call his country a dictatorship?

"You Americans, you should understand one thing - for 74 years under the Soviets we were prohibited from thinking about political opposition parties," says Turkmenbashi. "Look at America - you had a civil war, you didn't have instant democracy. Yet now you demand we create democracy in Turkmenistan overnight."

As for the allegations about the Taliban and drugs, Turkmenbashi cut off the interview before 60 Minutes could ask him these questions. So why did he invite us to do the story?

"I think he really believes at some level he's right and all the others are wrong. And you coming facilitates him giving the world the vision of himself that he thinks is gonna change their mind," says Olcott, laughing. "And it's a big honor. He's gonna be on60 Minutes."

Colorado River Basin plans for a drier future
Thanks for reading CBS NEWS.
Create your free account or log in
for more features.
View CBS News In
CBS News App Open
Chrome Safari Continue
Be the first to know
Get browser notifications for breaking news, live events, and exclusive reporting.