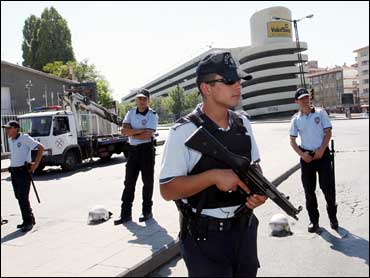 Police found and defused more than 1,300 pounds of explosives packed into a minibus parked near a marketplace on Tuesday, thwarting what one official described as "a possible disaster."

Bomb experts said the materials were similar to those seized in the past from Kurdish separatists. Turkey accuses Kurdish rebels of smuggling hundreds of pounds of explosives into the country from neighboring Iraq, where the guerrillas have been based for decades. Turkey is pressuring Iraq and the United States to crack down on the group in Iraq, threatening to do the job itself if others do not.

If authorities determine that rebels belonging to the separatist Kurdistan Workers Party, or PKK, were behind the plot, that could fuel debate about whether to stage a cross-border offensive to eliminate the threat, despite strong objections from the United States and Iraq against such a unilateral military move.

The guerrillas have staged numerous bombings and suicide attacks in the past, but the bomb discovered Tuesday was the largest ever linked to the Kurdish rebels.

The governor's office said police found sacks of bomb-making materials, including chemicals and gas canisters connected to a mobile phone, the method often used by Kurdish rebels in roadside bombing against troops in the country's Kurdish-dominated southeast near the Iraqi border. The type of the chemicals was not revealed.

Bomb-sniffing dogs led officers to the blue minibus parked in a multilevel parking lot just yards from a food market, authorities said. Turkey, an ally of the United States, had increased security on Tuesday, the sixth anniversary of the Sept. 11 attacks on the United States.

The van's license plate was stolen from another vehicle, and the owner had tipped off police about the theft, the state-run Anatolia news agency said.

A witness said an unidentified man had parked the minibus there at around 6 a.m., saying he was bringing goods to sell at the market, Anatolia reported.

In May, a suicide bombing in one of Ankara's busiest markets killed six people and wounded dozens. That bombing was blamed on the Kurdistan Workers' Party, but the group denied involvement.

Kurdish rebels have been fighting for autonomy for Turkey's Kurds since 1984. Tens of thousands of people have been killed in the campaign against the government.

Turkey, a predominantly Muslim but secular country, is a key NATO ally. It supports U.S. operations in Afghanistan and Iraq through the Incirlik Air Base in the southern part of the country, one of the most important U.S. military bases in the region.

Suicide bombers linked to al Qaeda hit Istanbul in 2003 with truck bombs containing ammonium nitrate-based bombs, killing 58 people in attacks that targeted two synagogues, the British consulate and a British bank. In February, a court sentenced seven people to life in prison for the bombings.