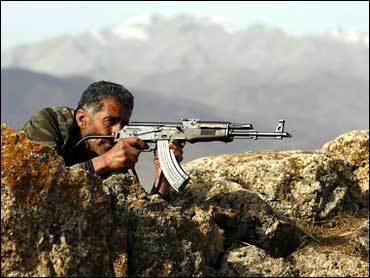 Prime Minister Recep Tayyip Erdogan said Thursday that U.S. objections would not stop Turkey from crossing into Iraq to eliminate Kurdish rebels. The Turkish military said it had killed more than 30 insurgents who were poised to launch an attack on the border.

President Abdullah Gul said Turkey is running out of patience with the Kurdish separatist attacks. A steady stream of U.S.-made Turkish fighter jets roared into the skies near the Iraqi border, loaded with bombs.

The Turkish military said it had spotted a "group of terrorists" near a military outpost in the province of Semdinli close to the border with Iraq on Tuesday and fired on them with tanks, artillery and other heavy weaponry. It said the group had been preparing for an attack.

In a statement posted on its Web site, the military said the troops kept firing on the group as they escaped toward the Iraqi territory. The report increased the official number of alleged rebels killed since Sunday to at least 64.

The Bush administration is urging Turkey not to launch an incursion that would destabilize Iraq's autonomous Kurdish north, the country's most stable region. But Erdogan said the U.S. desire to protect the north would not hinder Turkey's fight against the rebels from the Kurdistan Workers' Party, or PKK, who use mountain bases to rest, train and get supplies in relative safety before returning to Turkey to carry out attacks against government forces in the heavily Kurdish southeast.

"They (the Bush administration) might wish that we do not carry out a cross-border offensive, but we make the decision on what we have to do," Erdogan said during a visit to Romania. "We have taken necessary steps in this struggle so far, and now we are forced to take this step and we will take it."

He said that the U.S. should repay Turkish assistance for the invasion of Afghanistan with support for Turkey's struggle against the Kurdish rebels, who want autonomy in the southeast.

"Right now, as a strategic ally, the USA is in a position to support us. We have supported them in Afghanistan," he said.

The leader of Iraq's semi-autonomous Kurdish region, used as a base by the PKK, spoke recently to CBS News correspondent Elizabeth Palmer about the rapidly-building tension along the border with Turkey. 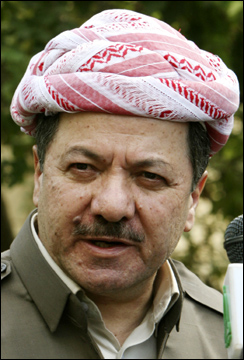 (AP Photo/Yahya Ahmed)
Massoud Barzani, seen at left, said there was no military solution to the decades-old conflict between the PKK and Turkey, and urged both sides to reach a political solution.

Barzani told Palmer that during the past three months, as Turkey stepped up its attacks on the rebels using artillery and airstrikes, "they haven't wounded any of the PKK fighters". The claim contradicted the Turkish military's purported count of 64 militants killed.

Elizabeth Palmer writes on her interview with Massoud Barzani, the leader of Iraq's Kurds

"If Turkey comes up with a peaceful solution, and the PKK refuses it, we are ready to do anything against the PKK. But if Turkey is using the PKK as an excuse to fight with us, we are ready to defend ourselves," Barzani said.

His comments revealed the deeply-rooted mistrust between Kurds and Turks that drives the simmering conflict in Kurdish Iraq. The stability of the region, which remains a bastion of relative peace and tranquility in Iraq, would be destroyed by an all-out battle between Turkish forces and the PKK. (Special Report)

Asked whether he would support U.S. military action to crackdown on the PKK, he again said it would bring no positive results. The border region is rugged and mountainous, and the militants know the area well.

"Even if all the U.S. Army goes in, they won't find one PKK guerilla," Barzani said.

An AP Television News cameraman saw two F-4 fighter jets flying low along the Iraqi border on an apparent reconnaissance mission, a day after warplanes reportedly pounded rebel positions along the border. Separately, at least five F-16 warplanes loaded with bombs were seen taking off from a base in the southeastern city of Diyarbakir, local reporters said. A batch of F-16s had took off from the same base earlier Thursday as well.

"We are totally determined to take all the necessary steps to end this threat," Gul said in Ankara before a visit by a delegation of high-level Iraqi officials.

Turkey is "expecting them to come with concrete proposals - otherwise, the visit will have no meaning," Foreign Minister Ali Babacan said.

The delegation is headed by Iraqi Defense Minister Abdul-Qader al-Obeidi and will include Minister of State for National Security Sherwan al-Waili, said Yassin Majid, an adviser to Prime Minister Nouri al-Maliki.

Iraq has promised to shut down offices used by rebel bases. But Turkey wants Iraq and U.S. forces to destroy the bases and extradite the rebel leadership to Turkey.

Turkey's top leadership has called for both an incursion and economic measures against northern Iraq if Turkey's demands are not met. The self-ruling Kurdish administration in Iraq's landlocked north relies heavily on Turkish investment and fuel imports.

Turkish troops have killed hundreds of Kurdish rebels since Jan. 1, the state-run Anatolia news agency said, citing military sources. It did not say how many Turkish soldiers have died, but about 30 troops have been killed this month alone.

On Sunday, a rebel ambush near the border killed 12 soldiers. Eight soldiers have been missing since then; the rebels say they are holding them hostage and have distributed photographs and video.

U.S., Turkish and Iraqi officials are working to free the hostages, Matthew Bryza, the U.S. deputy assistant secretary of state for European and Eurasian affairs, said at a meeting in Ankara of officials from Black Sea nations. He also said Washington has increased the level of cooperation in intelligence sharing with Turkey.