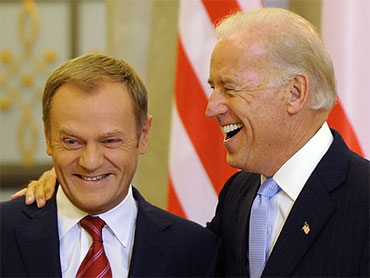 With 180,000 American troops now in position, the U.S. has reached a major crossroads on the road to war with Iraq, reports CBS News National Security Correspondent David Martin. Before the end of the week, the U.S. must decide whether to abandon or scale back its plans for using Turkish territory to open up a northern front against Iraq.

The Turkish parliament has put off a vote on whether to allow tens of thousands of U.S. combat troops in Turkey. Turkey asked the United States to nearly double its multibillion dollar aid package as a condition for allowing the American troops on its soil in a war against neighboring Iraq, diplomats said.

Ships loaded with equipment for the U.S. Army's 4th Infantry Division are waiting outside Turkish ports for permission to unload, and U.S. officials say they need an answer within the next 48 to 72 hours or they will have to divert the 4th Infantry to Kuwait.

The U.S. has such overwhelming military power that it can work around almost any problem, but Pentagon officials say the loss of Turkey would greatly complicate their battle plan.

It would require 10 more days for those ships to get from the Mediterranean through the Suez Canal and around to Kuwait. Then they would have to wait their turn behind all the other ships carrying equipment for the more than 100,000 U.S. and British troops already in Kuwait. And once in Kuwait, the 4th Infantry Division would still be hundreds of miles away from its objectives in northern Iraq.

Sending the 4th Infantry in from the south also means an Iraqi chemical attack or anything else that disrupted the flow of forces through Kuwait would wreak even greater havoc with the battle plan.

But none of that is stopping the march to war. The Pentagon has already issued the deployment orders to troops slated to become part of the Iraqi occupation force two months from now.

On the diplomatic front, the U.S. and Britain are looking for a creative way to convince reluctant members of the Security Council to vote for a new resolution opening the door to military action, reports CBS News Correspondent Bill Plante.

The two nations' effort for a second resolution lost momentum after the U.N.'s chief inspector Hans Blix said last week that Iraq had shown some signs of cooperation with inspections.

"Council members," said a diplomatic source, "find it difficult to walk away from inspections while they're showing some piecemeal progress."

So U.S. and British diplomats are talking about spelling out some sort of final challenge in the new resolution, which, if not met, would put the onus on Iraq, not U.N. members, for ending the inspection process.

President Bush said again that a second U.N. resolution, while useful, isn't necessary. And he suggested that a final chance is more than Saddam Hussein deserves.

"We don't need a second resolution. It's clear this guy could even care less about the first resolution. He's in total defiance," Mr. Bush said.

But the fact is that Mr. Bush's ally, British Prime Minister Tony Blair, says he needs the second resolution, and U.S. officials are on board with the idea of a final challenge to Iraq. The draft is ready, said one official, and we'll present it to the Security Council as soon as we think we can make some progress.

In Rome, U.N. Secretary-General Kofi Annan said Iraq had to "move very fast" to heed the call of the international community and cooperate with U.N. inspectors or face possible war. But he said it was up to the Security Council to decide if the inspections had gone on long enough.

France, with support from Russia and China, does not accept the U.S. view that the Security Council effectively endorsed force as an option to disarm Iraq in an earlier resolution that warned of "serious consequences" if Saddam persisted in defying U.N. demands.

With some 50 countries lined up to speak to the council in a session that could go over until Wednesday, early action by the United States and its close ally, Britain, was not expected.

As for weekend protests around the world by millions of people opposed to war with Iraq, Mr. Bush said they were irrelevant to his duty to protect America.

"Democracy is a beautiful thing, and that people are allowed to express their opinion," he said.

"Some in the world don't view Saddam Hussein as a risk to peace," he added. "I respectfully disagree."

Last Friday, an overwhelming majority of the 15 council members followed France's lead and called for extending U.N. weapons searches in Iraq. Secretary of State Colin Powell's argument that the searches were virtually useless was overridden.

On Tuesday, however, the Bush administration drew some support in Europe.

Thirteen incoming members of the European Union endorsed a joint declaration in Brussels, Belgium, that warned Saddam he had one last chance to disarm.

French President Jacques Chirac scoffed that the 13 had "missed a good opportunity to keep quiet."

In a parallel action backing the United States, 10 former communist countries, seven of them EU candidates, reiterated their support for Washington's position on Saddam.

Spokesman Fleischer did not fault Chirac, saying he simply had another approach to the Iraqi threat and has always leveled with Mr. Bush privately and publicly.

Fleischer suggested the same could not be said of German Chancellor Gerhard Schroeder, declining to say whether the German leader also told Mr. Bush the same thing in private as he said in public.