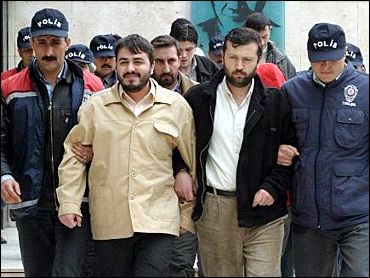 Turkey's interior minister said Tuesday that authorities have detained all of the suspects in an alleged plot to bomb a June NATO summit to be attended by President Bush and other leaders.

A Turkish court in the northwestern city of Bursa on Monday charged nine suspected members of Ansar al-Islam, a group linked to the al Qaeda terrorist network, with membership in an illegal organization. The charges came after authorities said they had foiled a plot to attack the June 28-29 summit in Istanbul.

Asked if there would be future operations against the group, Interior Minister Abdulkadir Aksu said: "There won't be a continuation. It was one group and they've been detained."

"Intelligence units located and captured them following operations that started long ago and they've been delivered to the court. Nobody should have any doubts, we're taking every measure," the Anatolia news agency quoted Aksu as saying.

Police detained 16 people in the raid last week in Bursa. Seven of those questioned were later released. Nine others were detained in Istanbul, but also were released.

Bursa prosecutor Emin Ozler confirmed Tuesday that authorities suspected the group was plotting an attack at the NATO summit, but declined to give details. He said the suspects had maintained their innocence during their questioning.

"Our investigation is continuing," he said by telephone.

The arrests came amid heightened security in the predominantly Muslim but secular country in the run-up to the summit. There have been increased security concerns since four truck bombings blamed on a Turkish al Qaeda cell killed more than 60 people in November in Istanbul. A court has charged 69 suspects in connection with those bombings and their trial starts later this month.

"We've full confidence in the Turkish authorities and our planning for the Istanbul summit goes forward without any changes," NATO spokesman James Appathurai said Tuesday.

Local Gov. Oguz Kagan Koksal said Monday the Ansar al-Islam suspects were also planning to attack a synagogue in Bursa and rob a bank to help bankroll the group.

Two of the suspects in custody confessed that they had surveyed the Bursa synagogue for a possible attack, but later gave up their plans after deciding that such an attack was against Islam and many people would die, Anatolia reported.

The daily Hurriyet and other newspapers said Tuesday that authorities suspected the group was plotting for three of its members to carry out suicide attacks against Bush at the summit. One of the suspects had stayed in Pakistan for six years, where he received flight training, the newspaper added.

The Cumhuriyet newspaper quoted alleged ringleader Alpaslan Toprak as telling authorities: "One of us said 'if only Bush's death were at our hands.' That's how this issue arose."

The governor told reporters Monday that the suspects planned to flee to Iraq to fight U.S. troops there once they had carried out a major attack in Turkey.

An Islamic group based in northern Iraq also goes by the name Ansar al-Islam and is suspected in the Feb. 1 bombings in Irbil that killed 109 people.

In addition to the NATO summit, Istanbul will host a meeting of foreign ministers from Islamic countries in June and the Eurovision song contest later this month.

The NATO summit will be the first since Romania, Bulgaria, Latvia, Estonia, Lithuania, Slovenia and Slovakia joined the alliance in April, swelling the alliance's membership to 26 countries.