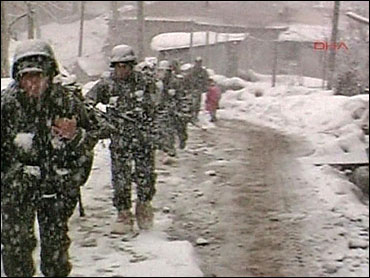 Supported by air power, Turkish troops crossed into northern Iraq on Friday in their first major ground incursion against Kurdish rebel bases in nearly a decade. But Turkey sought to avoid confrontation with U.S.-backed Iraq, saying the guerrillas were its only target.

The offensive, which started late Thursday after aircraft and artillery blasted suspected rebel targets, marked a dramatic escalation in Turkey's fight with the PKK rebel group even though Turkish officials described the operation as limited.

A military officer of the U.S.-led coalition in Iraq said on condition of anonymity that several hundred Turkish soldiers had crossed the border. The coalition has satellites as well as drones and other surveillance aircraft at its disposal.

CBS News correspondent Allen Pizzey in Baghdad reports Turkey's incursion runs the risk of involving soldiers in clashes with Iraqi Kurdish forces if it continues for any length of time, or expands beyond border areas.

The Kurdish Pesh Merga forces, who Pizzey says are both well-trained and highly motivated, have warned in the past that they would retaliate if Turkish forces attack Kurdish villages.

Pizzey adds that any clash between Turkish and Iraqi Kurdish forces could also prove problematic for the American military, as the U.S. is morally, if not legally bound to help Iraq defend its sovereignty.

It was not possible to independently confirm the size or scope of the attack on the Kurdistan Workers' Party, or PKK, which is considered a terrorist group by the United States and European Union. CNN-Turk television, citing Turkish security officials, said the operation could last two weeks.

The advance was the first confirmed Turkish military ground operation in Iraq since the U.S.-led invasion that toppled Saddam Hussein in 2003. Turkey's army is believed to have carried out unacknowledged "hot pursuits" in recent years, with small groups of troops staying in Iraq for as little as a few hours or a day.

Turkey staged about two-dozen attacks in Iraq during the rule of Saddam, who conducted brutal campaigns against Iraqi Kurds. Some Turkish offensives, including several in the late 1990s, involved tens of thousands of soldiers. Results were mixed, however, with rebels suffering combat losses but regrouping after Turkish forces withdrew.

The PKK militants are fighting for autonomy in predominantly Kurdish southeastern Turkey and have carried out attacks on Turkish targets from bases in the semiautonomous Kurdish region of northern Iraq. The conflict started in 1984 and has claimed as many as 40,000 lives.

Turkey's government has complained that Iraqi and U.S. authorities weren't doing enough to stop guerrilla operations. The Turkish air force has been staging air raids on PKK forces in the north since December with the help of intelligence provided by the U.S., a NATO ally.

Turkish Prime Minister Recep Tayyip Erdogan said that he called his Iraqi counterpart, Nouri al-Maliki, on Thursday night to give him advance warning of the operation. Erdogan said he later briefed President Bush in a telephone call.

"The Turkish armed forces will return after they finish their job," Erdogan said in a televised speech. "The goal of the operation and of operations that will be conducted is just, and only, PKK camps located in the north of Iraq."

Turkey's president, Abdullah Gul, issued a statement saying the military would be careful in attacking the guerrillas in tough terrain and weather. "Utmost care is being taken so that innocent civilians living in the region are not negatively affected," he added.

Nihat Ali Ozcan, a terrorism expert with at the TEPAV research center in Ankara, said the operation was likely launched to hit at guerrillas before the traditional start of the fighting season in the spring.

"I think it is aimed to keep the PKK under pressure before the group starts entering Turkey," he said on CNN-Turk television.

The operation was reportedly concentrated in the Hakurk region, south of the Turkish border town of Cukurca.

The Turkish military posted photographs on its Web site that it said were images of the operation. In one photograph, five soldiers in white suits walk up a snowy hill in the dark. Others show a soldier walking with a land mine detector and three military helicopters on the ground.

PKK spokesman Ahmad Danas said two Turkish soldiers were killed and eight wounded in clashes along the 240-mile border, but there was no comment from the Turkish military and no way to confirm the claim independently.

"The land operation is a whole new level," Bryza said in Belgium. "What I can say is that what we've been doing until now has been working quite well."

U.N. Secretary-General Ban Ki-moon expressed concern about the escalation. He said he recognized Turkey's need for security, but appealed to Turkey and Iraq to work together to promote peace.

"The protection of civilian life on both sides of the border remains the paramount concern," Ban said, repeating calls for the PKK guerrillas to end their attacks inside Turkey.

The European Commission, the administrative body of the European Union, appealed to Turkey to act with restraint.

"Turkey should refrain from taking any disproportionate military action and respect human rights and the rule of law," commission spokeswoman Krisztina Nagy said.

"The EU understands Turkey's need to protect its population from terrorism," she added. "We encourage Turkey to continue to pursue dialogue with international partners."