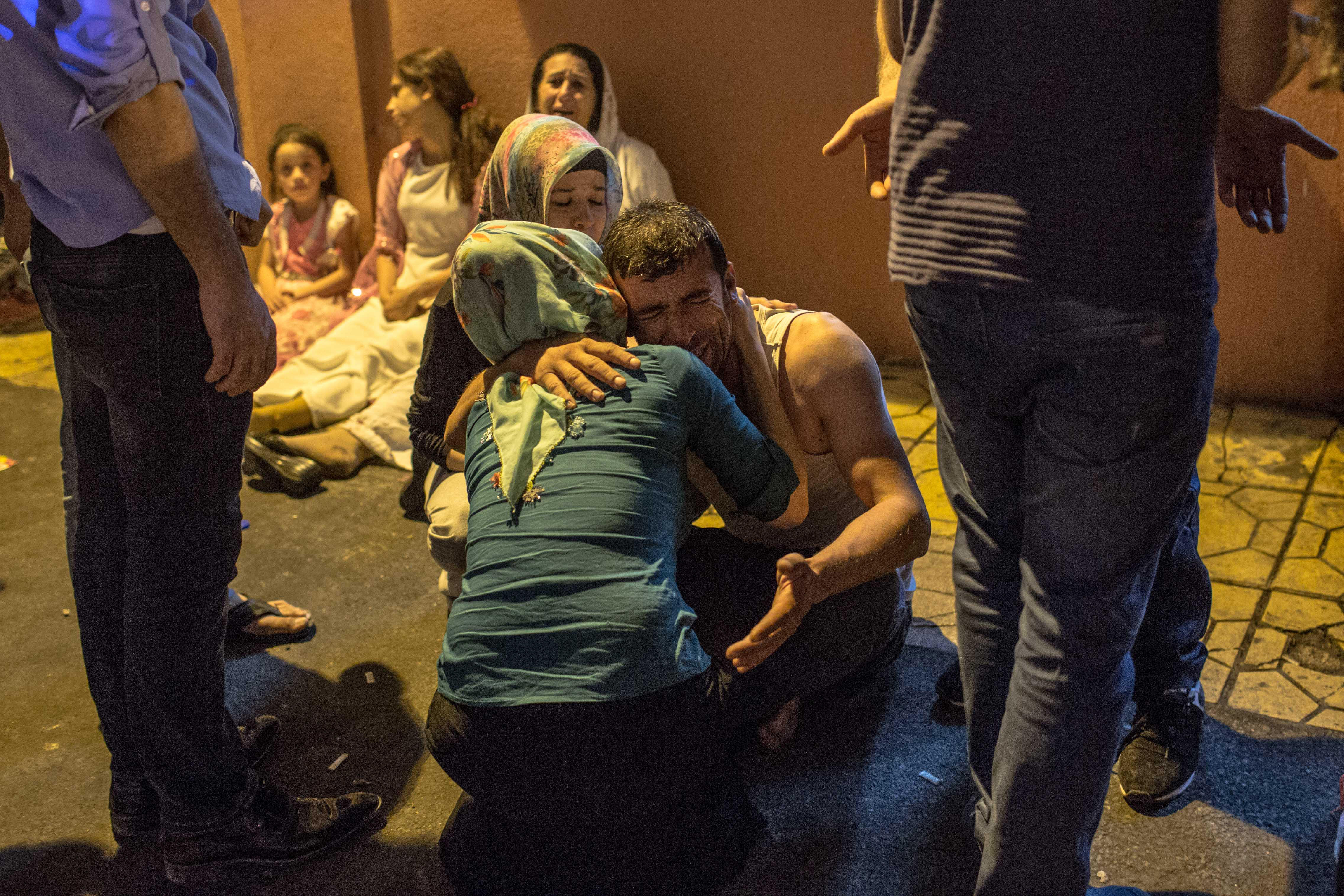 Deputy Prime Minister Mehmet Simsek said the “barbaric” attack in the city of Gaziantep, near the border with Syria, on Saturday appeared to be a suicide bombing. Other officials said it could have been the carried out by either Kurdish militants or Islamic State of Iraq and Syria (ISIS) group extremists.

Photos taken after the explosion showed several bodies covered with white sheets as a crowd gathered nearby.

The Gaziantep governor’s office early Sunday raised the death toll from 22 to 30. It said the number of wounded remained at 94.

Turkey has been rocked by a wave of attacks in the past year that have either been claimed by Kurdish militants linked to the outlawed Kurdistan Workers’ Party - known by its acronym PKK - or were blamed on . In June, suspected ISIS militants attacked Istanbul’s main airport with guns and bombs, killing 44 people.

The attack comes as the country is still reeling from last month’s failed coup attempt, which the government has blamed on U.S.-based Muslim cleric Fethullah Gulen and his followers.

Earlier this week, a string of bombings blamed on the PKK that targeted police and soldiers killed at least a dozen people. A fragile, two-and-a-half-year-long peace process between the PKK and the government collapsed last year, leading to a resumption of the three-decade-long conflict.

Simsek, interviewed on NTV television, said, “This was a barbaric attack. It appears to be a suicide attack. All terror groups, the PKK, Daesh, the (Gulen movement) are targeting Turkey. But God willing, we will overcome.” Daesh is an Arabic name for ISIS.

Simsek later traveled to Gaziantep along with the country’s health minister to visit the wounded and inspect the site of the attack.

“This is a massacre of unprecedented cruelty and barbarism,” he told reporters in Gaziantep. “We... are united against all terror organizations. They will not yield.”

He told reporters it was too soon to say which organization was behind the attack.

Prime Minister Binali Yildirim condemned the bombing that turned “a wedding party into a place of mourning” and vowed to prevail over the “devilish” attacks.

“No matter what this treacherous terror organization is called, we as the people, the state, and the government will pursue our determined struggle against it,” he said.

A brief statement from the Gaziantep governor’s office said the bomb attack on the wedding in the Sahinbey district occurred at 10:50 p.m.

Mehmet Tascioglu, a local journalist, told NTV television, that the huge explosion could be heard in many parts of the city.

Police sealed off the site of the explosion and forensic teams moved in. Hundreds of residents gathered near the site chanting “Allah is great” as well as slogans denouncing attacks.