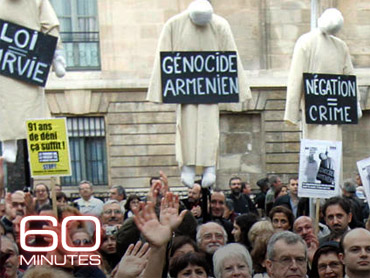 Wars are fought over oil, land, water, but rarely over history, especially about something that happened nearly 100 years ago. But that's what Turkey and Armenia are still fighting over: what to label the mass deportation and subsequent massacre of more than a million Christian Armenians from Ottoman Turkey during World War I.

Armenians and an overwhelming number of historians say that Turkey's rulers committed genocide, that its actions were a model for what Hitler did to the Jews. The Turks, meanwhile, say their ancestors never carried out such crimes, and that they too were victims in a world war.

Ever since, this battle over history has not only ensnared the two nations but even the White House and Congress, where resolutions officially recognizing the genocide are currently moving through the House and Senate.

But our story begins where the lives of so many Armenians ended, far from Istanbul, in the desert.

"60 Minutes" and correspondent Bob Simon took a drive into what is now Syria, to the barren wilderness, to what amounts to the largest Armenian cemetery in the world.

Balakian is an Armenian American who has written extensively about what happened in this desolate place.

According to Balakian, 450,000 Armenians died in this spot in the desert. "In this region called Deir Zor, it is the greatest graveyard of the Armenian Genocide," he explained.

Deir Zor is to Armenians what Auschwitz is to Jews. The most ghoulish thing about the place is that 95 years later the evidence of the massacres is everywhere.

Just a short distance from the banks of Euphrates there's a dump. It's also the site of a mass grave. It has never been excavated. All we had to do was scratch the surface of the sand to collect evidence of what had happened here.

Under the surface was evidence of bones. "It's the hill full of bones," said Dr. Haroot Kahvejian, an Armenian dentist who showed Simon around.

"Nobody bothered to dig them up until now?" Simon asked.

It was extraordinary standing on a mound where perhaps thousands of people lie entombed. There is no record of who they were or where they could have come from.

"Look at that. There are kids who know exactly where they are. They are finding them by the dozen," Simon observed.

"Evidence comes in many forms. It comes in photographs, it comes in texts and telegrams," Balakian said. "And it also comes in bones."

So just how did all these bones end up here?

In 1915, the First World War was raging and the Ottoman Empire was crumbling. The Armenians were a Christian minority who were considered infidels by the ruling Muslims -- a fifth column who sided with the enemy in the war.

The fact that they were prosperous didn't help, says Balakian, whose great uncle survived the genocide and wrote about it in a memoir Armenian Golgotha.

"Like the Jews of Europe the Armenians of the Ottoman Empire had a dominant role in commerce and trade, they were highly educated, many of them," Balakian.

And he said they were highly resented.

Asked what happened next, Balakian said, "What happens from the spring of 1915 on through the summer is a well orchestrated project of government planned arrests and deportations."

Some were forced to buy round trip tickets for train journeys from which they never returned. They ended up in box cars; the rest, mostly women and children were forced on death marches for hundreds of miles. Many perished from starvation, disease or brutal killings. The survivors ended up in concentration camps hundreds of miles from Istanbul, out of sight.

At the time of the deportations, American diplomats in the region sent dispatches to Washington detailing what they had seen and heard. Just weeks after the arrests had begun, Henry Morgenthau the U.S. ambassador, sent off this one: "Deportation of and excesses against peaceful Armenians is increasing and from harrowing reports of eyewitnesses it appears that a campaign of race extermination is in progress…"

To this day the Turks vigorously deny there was any such campaign.
When we spoke to Nabi Sensoy, he was Turkey's ambassador to Washington.

"We were in Syria, sir, and we scratched the sand and came up with bones. How can you argue with that?" Simon asked the ambassador.

"Well bones you can find anywhere in Turkey, you know. There have been a lot of tragedies that have happened in those lands," he replied.

"Excuse me, sir. We dug up these bones in a place called Deir Zor, which Armenians say is their equivalent of Auschwitz," Simon pointed out.

"Well, I don't think that it was anything to comparable to Auschwitz. This was only deportation. And things happened on the road," Sensoy replied.

"But the deportations ended in massacres, didn't they?" Simon asked.

"No, it did not," the ambassador insisted.

"Weren't there massacres, mass executions and death marches of the Armenians?" Simon asked.

"There was no death marches of Armenians. There was deportation and tragic things happened. Many people perished under the deprivations of the First World War," Sensoy said.

But did what happen in 1915 amount to genocide? The UN defines it as the intent to destroy a racial, ethnic or religious group.

"The most important thing is the intent. The killings are something else. It happened on both sides. But whether it constitutes genocide is another matter. It is a legal word and it should not be lightly used," Sensoy explained.

"But you're saying there was no intention of the Turkish government…," Simon said.

"There was no intention of annihilating in all or in part the Armenian population," Sensoy said.

Bishop Sarkin Sarkissian is convinced that the massacres were intended and meticulously executed. He showed us one of the caves into which he said untold numbers of Armenians, women and children were thrown.

It was, the Armenians believe, a primitive gas chamber.

According to the bishop, they lit fires at the mouth of the cave.

"And the people inside couldn't breathe anymore?" Simon asked.

"Exactly. And there is no other way to escape out," Bishop Sarkissian replied.

The Ottoman Turks developed a template, which according to genocide scholars, was later adopted by the Nazis.

"Most dramatically we have Adolf Hitler saying eight days before invading Poland in 1939, 'Who today, after all, speaks of the annihilation of the Armenians?' Hitler was inspired by the Armenian extermination. You know, it made him think, 'Well, sure you know, you can get rid of a hated minority group and if you're powerful and your side wins, that event will never get recorded,'" Balakian explained.

The Turks dispute the evidence that Hitler ever uttered those words or was inspired by the events of 1915. Nonetheless, when the Ottomans were swept from power, and the modern Turkish state was founded, all memory of what happened to the Armenians was erased. Records were destroyed, a new alphabet was adopted and ever since, the massacres have not been taught in schools.

The use of the word genocide is regarded as an insult to Turkish nation; it is a jailable offense.

Hrant Dink, who edited an Armenian newspaper in Turkey, was prosecuted three times for insulting the Turkish nation. He also received thousands of death threats from extremists, but kept on writing.

His daughter Delal recalls the Turkish authorities telling her father they couldn't protect him.

"They were kind of warning my father about what might happen. And the days following that, nationalists groups came in front of Agos [her father's newspaper] ... in front of the newspaper shouting that he's their target. And he's their enemy. And one day they will come for him," Delal Dink remembered.

Days later, as he stepped outside that same office, he was shot at point blank range.

Dink is viewed as a martyr now, in Armenia, where he is seen as the latest victim of the genocide. His picture emerges from the wall of flowers on a hillside outside the capital Yerevan, where every April hundreds of thousands attend a memorial to remind the Turks, and the world, of what they went through. They pay homage to those who died nearly a century ago. It's as if the entire country turns out for what is emotionally a funeral, a burial the victims never had.

And on the same day, in Times Square, thousands of Armenian Armenians gather to demand that Congress pass a resolution recognizing the genocide.

Two years ago, before a resolution was to be put to a vote in the House, Turkey recalled Ambassador Sensoy in protest. Its president warned of "serious troubles" and its top general said that military ties with the U.S. would never be the same. To limit further damage, the Bush administration and eight former secretaries of state then weighed in to kill the bill. It worked.

"Eight former secretaries of state rallied behind Turkey to defeat that resolution," Simon told Ambassador Sensoy. "Why do you think that was, Sir?"

"Well, I think it's the importance of Turkey for the United States. We have a long list of positive agenda between us," he replied.

And the items on that list, Sensoy says, are far more important than the Armenian issue: Turkey is, after all, a regional superpower and an essential broker between the U.S. and the Muslim world. It has the second largest army in NATO and the U.S. relies on the country's Airbases for its wars in Iraq and Afghanistan. Seventy percent of American supplies to those wars go through Turkey, which is also a crucial conduit for oil.

Which is probably why no U.S. president has uttered the word genocide.

During his presidential campaign, Candidate Obama promised that, if elected, he would use the word. "The Armenian genocide," he said, "is a widely documented fact supported by an overwhelming body of historical evidence."

But when President Obama made his first overseas trip to Turkey, he never mentioned the word.

Late last year, the U.S. brokered an agreement between Turkey and Armenia to establish diplomatic relations, with one key condition: that a historical commission be formed to rule on whether a genocide took place. Nearly six months later, the deal appears to be unravelling. The battle over the use of the word is far from over.