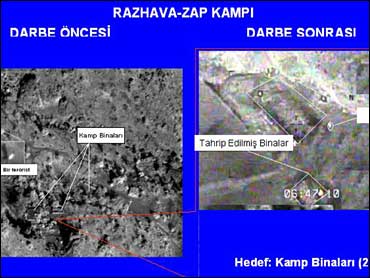 Up to 175 rebels were killed on Dec. 16 alone, the military said in a statement posted on its Web site. The military said other hideouts were hit in a cross-border air strike on Saturday, followed by artillery fire.

In Iraq, a Kurdish official said information from the rebels cast doubt on Turkey's claims.

"These are exaggerated figures," said Mahmoud Uthman, a Kurdish leader and member of parliament. "Most of the villages (that were attacked) were abandoned."

Iraqi officials said the Dec. 16 operation - the first confirmed by Turkey since the U.S.-led invasion in 2003 - violated Iraqi sovereignty. That operation was followed by an incursion by ground forces, who spotted a group of Kurdish rebels preparing to cross into Turkey.

"A total of 33 sets of targets (more than 200 individual targets) exclusively used by the terrorists were hit by our warplanes and our artillery," the statement said of the Dec. 16 operation.

The Turkish military released photographs and footage it said were shot from planes before and after the air assaults. Most of the pictures were too blurry to distinguish spots marked as rebel facilities, but in some, purported camp areas and demolished buildings were visible.

But a U.S. official in Ankara said Tuesday that there was no evidence of a Sunday air assault. The official spoke on condition of anonymity because he was not authorized to release the information.

In an earlier statement, the military said it was hard to determine precisely how many rebels died in recent attacks but put the figure in the hundreds.

In a province inside Turkey near the Iraqi border, Turkish troops backed by helicopter gunships killed five Kurdish rebels on Tuesday, the military said in a separate statement posted on its Web site.

Officials in Iraq have claimed civilians were killed in the attacks, but the Turkish statement said any reports of civilian casualties were a fabrication and Turkish Prime Minister Recep Tayyip Erdogan said civilians were not targeted.

"Air operations or ground operations - we will do whatever necessary within the limits of what international law allows us to do," Erdogan told legislators from his ruling party on Tuesday. "Civilians have never been our targets."

The U.S. has been providing intelligence to Turkey on the Kurdish rebels since a Nov. 5 meeting between Erdogan and President Bush, who said the rebel group was an enemy of the U.S., Turkey and Iraq.

A coordination center has been set up in Ankara so Turks, Iraqis and Americans can share information. The Dec. 16 air strike was due to intelligence shared by Washington.

The rebel group Kurdistan Workers' Party, also known as PKK, has waged a war for autonomy in parts of Turkey near Syria, Iraq and Iran since 1984. The fighting has cost tens of thousands of lives. The U.S., the European Union and Turkey consider the PKK a terrorist organization.

Turkey has said it would not tolerate more PKK attacks, after a string of deadly ambushes killed dozens of troops in the past months. In October, the Parliament allowed the government to send troops into Iraq to hit rebel bases there.

The Cabinet then authorized the military to hit rebel targets in Iraq.